They came across Rabbi Zalman Spitezki, director of Chabad on Call of Greater Baltimore, who was there studying Torah, and pointed a gun at him.

Spitezki is not a permanent member of Khal Chassidim, but he sometimes visits to see friends.

He was studying after prayers. There was only one other person there. Suddenly, Spitezki felt the presence of a person next to him. He looked and saw a young masked African American man pointing a gun at Spitezki. The intruder did not say a word.

Spitezki then charged the intruder.

“All this happened very quickly. I charged at him, and thank God that it scared him,” Spitezki said. “He didn’t see it coming. He tried to like to defend himself and put his hand in front of me to push me away. He didn’t touch me but got my glasses off my head, so my glasses went flying, and then he ran off.”

Two nights before, Spitezki has attended Security Tactical LLC’s self-defense class, where he learned three defense tactics: run, hide, or fight. In this situation, only the third was possible.

Spitezki, a Belgian, is father to five children and husband to Chanie Spitezki. The children do not know the details of the event, but he said they were relieved when Spitezki arrived for Shabbat, at last, an hour late.

Khal Chassidim is a synagogue and study institute founded in 2015.

“I feel that there is an urgent need to enhance security measures in the Park Heights corridor in general but also specifically in houses of worship and community buildings,” Spitezki said.

“When the suspects are arrested, in addition to the robbery related charges, there will also be a charge for aggravated assault since they pointed a gun at the victim,” said Detective Jeremy Silbert, public information officer at the Baltimore Police Department.

The Northwest District has increased patrols in the community and detectives are continuing to investigate these incidents, according to Silbert.

Chabad on Call seeks to provide patients and their families with extensive, caring support for those at the medical centers in Greater Baltimore. Additionally, Chabad on Call serves the needs of the broader Jewish medical community. 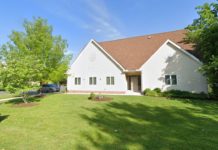