There are likely few in the Jewish community who don’t know the fundamentals of the story of the Exodus, whether from Hebrew school or a parent’s rendition or the dramatic stylings of the late Charlton Heston.

Every year, Jewish families reach for Haggadahs to help tell that story, and to lead them through the rituals, prayers, and songs of Pesach.

This year, if your family is like mine, you might choose to use the same Haggadah your household has been using for the last 20 plus years, with an advertisement for Maxwell House on the back cover. Or, you could choose to liven things up with a new Haggadah that may have a different spin on the old story on Moses and Pharaoh.

Written by Rabbi Yosef Zvi Rimon, the Shirat Miriam Haggadah works to illustrate the Passover story using charts, diagrams, and tables, while also sprinkling in dozens of different amusing riddles. Rabbi Eli Yoggev of Beth Tfiloh Congregation said this Haggadah is very popular in the Orthodox world, as it grounds itself in Jewish tradition while tracing things back to Talmudic sources.

Injecting poetry into a service normally dominated by prayer and song, this Haggadah, created by Rabbi Rachel Barenblat, carves out a greater role for women in the Passover saga. In addition to adding questions for four daughters right next to the traditional ones, this Haggadah makes space for female figures like the prophet Miriam, Moses’ sister, and the midwives Shifrah and Puah, who saved the infant Moses from the edicts of Pharaoh.

Organized and color coded into different distinct sections, this handsome and popular Haggadah written by Rabbi Shmuel Goldin, plunges into the depths of the Passover story to emerge with clear explanations of its meaning.

Intended as a companion for its 2020 Social Justice Seder, Jews United for Justice is currently hard at work on a Haggadah written “through the framing of paid family and medical leave,” said Rianna Lloyd, JUFJ’s Baltimore community organizer. JUFJ is hoping to more closely connect the Passover story to the issue, with Lloyd stating that, similar to the flourishing period before Egyptian slavery, paid family and medical leave is needed for people to cultivate families.

Produced by Jews for Racial & Economic Justice in collaboration with activists and leaders from around the country, this Haggadah supplement interprets the Passover story in the light of current issues regarding criminal justice reform and policing of the African American community. Written in the aftermath of the deaths of Michael Brown and Eric Garner, it calls for greater understanding and cooperation between black and Jewish communities, and for the creation of “lasting allies who will walk with us into the promised land of our collective liberation.” 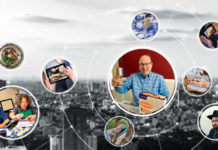