As members of the Jewish community, it can be common for us to assume that our Jewish traditions are the Jewish traditions; that the customs and rituals we grew up with are more or less the same for everyone else, or at least the standard against which others are measured.

But as descendants of a Diaspora that has crossed continents and oceans over the span of millennia, it shouldn’t come as a surprise that the practices of a Jewish community in one corner of the map could look quite different from those of another. Passover traditions are no exception.

Columbia Jewish Congregation Rabbi Sonya Starr said that some Passover traditions emerged from a political context. “Some put a tomato on the seder plate as a reminder of migrant workers,” she said. “Some put Miriam’s cup on the table because she was a prophet and was crucial in the Exodus story and helps symbolize the role women played in the Exodus story, and since, throughout Jewish history.”

In the same vein, Jews United for Justice supports the placing of an orange on the seder plate, “symbolizing our commitment to the LGBTQ community,” said Rianna Lloyd, JUFJ’s Baltimore community organizer. According to Rabbi Ariana Katz of Hinenu: the Baltimore Justice Shtiebl, this was an innovation of Susannah Heschel, a professor and daughter of Rabbi Abraham Joshua Heschel.

While touring Oberlin College in the 1980s, Katz said, Heschel “saw that gay and lesbian Jews were putting a slice of bread on the seder plate, to convey that [they] felt as welcome in the Jewish community” as that slice of bread during Pesach. While sympathetic to the students’ grievances, Heschel didn’t favor expressing them in that manner. “So she started putting an orange on [the seder plate],” Katz said. “Everyone would eat a slice of the orange and spit out the seeds of homophobia.”

In addition to different communities having distinct traditions, there are also different interpretations of a single tradition. One that Starr noted involves placing an olive on the seder plate, as a symbol “of the hope for peace in the Middle East.” According to Katz, however, the olive is to show “Jewish solidarity with the Palestinian people. Olive trees are important to Palestinian livelihoods, but those trees are often uprooted by Israeli forces.”

Meanwhile, other traditions emerged out of different cultural contexts. Starr mentioned a Spanish/Portuguese tradition in which “the afikoman is tied to a napkin, slung over the shoulder of one of the children.” At this point, the head of the seder asks a trio of questions: Where are you coming from, where are you going, and what are you taking with you?

“A Romanian one is to take a pillow case filled with heavy objects before the seder,” Starr said. “During the ‘Avadim Hayinu,’ they take turns carrying it around on their backs as a symbol of the hard work in Egypt.”

Starr went on to recount an Indian custom of having a separate cup of wine reserved for Pharaoh and the 10 plagues, a Tunisian custom of placing a fishbowl with a live fish on the table during the seder, and an Afghani/Persian custom of whacking table mates with a scallion during “Dayenu.”

The purpose of the scallion custom is to serve as a reminder of gratitude for what one has in life, according to Rabbi Deborah Wechsler of Chizuk Amuno Congregation. “‘Dayenu’ is a lesson in appreciating your blessings,” she said. “We use scallions because of a verse in the Torah, when the Israelite people complained to Moses that things were so much better in Egypt, where they had scallions and leeks. So in this Afghani ritual, we hit our neighbors with a scallion, to remind them you should be grateful for what you have and not always be looking out for the next thing.”

In fact, the seder itself may come from a surprising source. According to Wechsler, her family’s seder “is based on a Greek symposium, and some historians think that the seder is a Jewish version of that symposium. The brilliance of the rabbis was taking what was meant for just the elite of society and making it an experience for the entire Jewish community.”

Summing up her thoughts on Passover traditions, Katz said that the “whole point is to do things that make us ask questions. We’re doing these things that feel a little out of the ordinary, so we can ask questions and together strategize on how to get free.”

According to Starr, what all of these traditions have in common is that they “are trying to give contemporary meaning to this ancient holiday. We are trying to say that the Exodus story is an ongoing story of Exodus from many kinds of hardships, oppressions, slavery, and we hope to work in the coming year on peace and justice for all people. All of these are ways for the Passover story to come alive in contemporary times.”

Speaking of the ongoing health crisis, Starr said she had “no doubt there will be new traditions symbolic of the coronavirus, symbolizing this new disease as one more form of enslavement. And we are working towards good health in the future.” 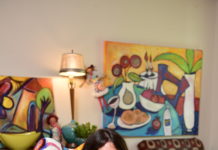