Yosef Webb-Cohen has a lot to teach you about racial and religious dynamics.

Webb-Cohen, 43, was born in North Carolina but raised in Sacramento, California. He lives in Columbia with his partner Beth and 8-month-old Sam, though he works in West Baltimore where he is the Baltimore Jeremiah Fellowship coordinator for Jews United for Justice. He creates inclusion training as the senior educator and co-founder of the Calico Hill Collective. He also studies at the University of Maryland, Baltimore, School of Social Work.

Webb-Cohen is involved in the Jews of Color Field Building Initiative, Hinenu: The Baltimore Justice Shtiebl, and Jews in ALL Hues. He focused his studies on interfaith dialogue for peace, with a bachelor’s in anthropology and an emphasis on indigenous Native American peoples.

What is the Calico Hill Collective?

We focus on inclusion-diversity work, coaching organizations. Coaching is usually on a one-on-one basis. Somebody wants some inclusion training, they want to work on Jewish-black relations? They learn the history of Baltimore. Let’s learn about forced segregation through red lining and financial insecurity, why all those people of color live in one corner of the city. Banks literally would not give them loans to move out or do home improvement. … We help people learn about this context.

There’s an organization I’m working with now forming a leadership board, so me and one of my partners are going into that space and teaching a multireligious dynamic, asking how can they work together. What dynamics of race, class, religious identity, gender expression exist, and how is that playing out as a board, and how can we get you to engage with that?

I grew up Catholic, later became a Protestant. Later in life, I moved to the East Coast to attend Wesley Theological Seminary in NW Washington, D.C. I graduated with a masters of divinity, but during my study converted to Judaism. I had always been interested in religious groups working together and now I have a unique insight.

How did that bring you to your Jewish identity?

Growing up, I always spent more time in the Old Testament; it just seems more relatable to me. I wanted to engage with my theology. I took a class in how we got to this figure of Jesus, and I realized that I didn’t believe in it. My theology didn’t rely on the divinity of Jesus.

I actually met a cantor and we got talking. I decided I wanted to convert even before that, but he helped. So I went through a formal conversion process.

Theology was an intellectual vehicle [to my Jewish identity]. It was a feeling in my soul, in my heart. My soul was there, and my body just didn’t realize it.

I was supposed to go to school full time but our child was born, so I’m just getting the groundwork classes out of the way. My partner works full time, so I created an office downstairs. I’m chasing around [Sam]; I have an older cat who’s 14 so the baby is like, “This the most amazing thing,” and the cat being old, slow, and deaf is like, “Oh, no.” Also the cat is the cat and doesn’t care about the wall I built.

What is your experience as a Jewish POC in Baltimore?

I will say Baltimore is an interesting city to be a Jew of color. It has a rich history of African descent, and a rich Jewish history, but for some reason people think those two don’t intersect.

There’s a lot of assumptions that happen. When I walk into a room with a larger knitted kippa, most people assume I’m Muslim first. But we are quickly building more community. I’m glad everyone’s using the digital platform because we’ve actually grown. Hinenu has an online Shacharit service now, and I’ve been engaging with several Jewish things I wasn’t aware of, like a tech study with Valley Beit Midrash in Arizona. I like to look at the bright side. 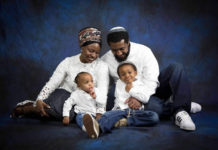 You Should Know … Tikvah Womack 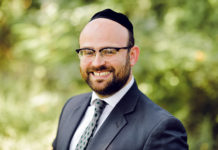 You Should Know … Rabbi Mordechai Bennett