For nearly a month, students at Perelman Jewish Day School in suburban Philadelphia have begun each weekday online, reciting the Pledge of Allegiance, counting the Omer and singing Israel’s national anthem, “Hatikvah.”

One morning in late April, 4-year-old Shira Bannett, one of the youngest students in the school’s Hebrew immersion program, sang “Hatikvah” solo in front of 250 students and their families on Zoom.

“It was such a touching moment,” said the school’s director, Judy Groner. “The fact that someone so young could do that, with perfect pronunciation of Hebrew, truly brought us to tears.”

Across the United States, Jewish day schools from California to Connecticut have been forced by the coronavirus pandemic to adapt almost overnight to online learning. The sudden change has brought with it new energy and thinking when it comes to alternative educational methods, but also plenty of challenges.

“At the moment, we’re focused on delivering excellent education,” said Paul Bernstein, CEO of Prizmah, a network that represents about 300 Jewish day schools across North America serving some 90,000 students. “Jewish day schools have done a phenomenal job moving to virtual teaching and learning. But this places a lot of pressure on teachers, as well as on students and families.”

Schools are also facing financial pressures the likes of which they haven’t experienced since the Great Recession of 2008-‘09.

“Tuition collections are down, and financial aid requests for the remainder of the year have increased,” said Chavie Kahn, director of school strategy and policy at UJA-Federation of New York. The New York metro area accounts for well over half of all Jewish day school enrollment in America, with more than 200 day schools and yeshivas attended by 125,000 students in New York City, Westchester and Long Island.

“Most of these schools are looking to the post-2008 economic crisis as a benchmark of what this crisis will bring,” Kahn said. “But the big unknown is the 2020-21 school year.”

Jewish schools are among hundreds of Jewish institutions that sought government-backed loans through the recently passed $2.2 trillion federal stimulus package, which included $349 billion under the Payment Protection Program for small businesses and nonprofit groups. More money may be coming under another $484 billion coronavirus spending bill passed by Congress in April. 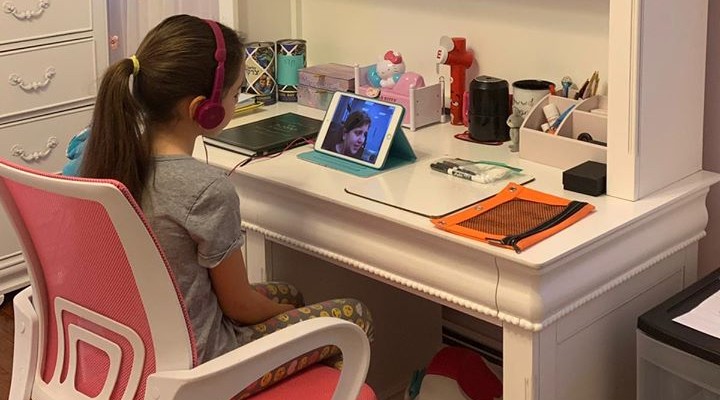 Across the United States, students and schools from California to Connecticut have been forced by the coronavirus pandemic to adapt almost overnight to online learning. (Courtesy of Mazel Day School)

Bernstein estimated that about half the schools that applied succeeded in the first round, securing $100 million to $200 million in loans.

Rabbi Ari Segal, head of Shalhevet High School in Los Angeles, said his Modern Orthodox school is one of the luckier ones. In late April, Segal learned that the $1 million loan Shalhevet applied for had been approved — largely thanks to the school’s longstanding relationship with Farmers & Merchants Bank. While annual tuition and fees at Shalhevet are approximately $42,000, about half the school’s 250 students are on scholarships.

“We’re working incredibly hard to let our families know that if they need additional financial assistance, we’ll make it available to them — even if they’ve never had to ask before,” Segal said. “Los Angeles is no different than the rest of the country. But we’re very fortunate that we’ve been operating with a very healthy budgetary model over the last decade, so we’re prepared to weather the storm.”

Nevertheless, the school is forecasting a 15% drop in overall income this year.

In Washington, the 444-student Milton Gottesman Jewish Day School planned to raise just over $1 million this school year. So far it’s at $700,000, about $100,000 behind where it was last year, according to Joshua Suchoff, Milton’s chief development officer. But on May 4 the school leadership shared the good news that Milton was able to secure a $1.4 million loan from the Payment Protection Program.

Meanwhile, the school established an online learning platform, and over the last month has celebrated bar/bat mitzvahs online, held communal Kabbalat Shabbat and Havdalah services, and even staged a virtual production of “Fiddler on the Roof.”

“Our faculty and staff have gone above and beyond to provide continuity of instruction, academic excellence, and social-emotional support,” head of school Naomi Reem and board president Edna Friedberg wrote in a letter. “We see the children continuing to grow and thrive.”

“The hunt didn’t take the kids outside the house or their yards, but it did get them moving around,” said headmaster Daniel Weiss. “Our students have a deep connection to Israel, and the final clue took them to their mailboxes, where they found flags, chocolates and other Israeli treats that the teachers had dropped off that morning.”

The school’s 108 students have been online since shortly after March 13, the last day of in-person classes. Weiss said his biggest school-related disappointed is that the eighth graders won’t be taking their annual trip to Israel this year.

Before the pandemic, Rabbi Mordechai Zucker, who teaches fourth grade at Melvin J. Berman Hebrew Academy in Rockville, Maryland, had never heard of Zoom. A 38-year veteran of the school system, Zucker was just weeks away from his retirement when the 642-student school halted in-person classes.

But Zucker quickly mastered the art of online instruction, and on May 13 he’ll be honored with an online anniversary celebration.

Meanwhile, a number of Jewish communities are stepping up their financial support for day school families.

In New Jersey, the Jewish Federation of Greater MetroWest created a $250,000 emergency relief program for day school families that have suffered job losses or significant drops in income. More than 180 grants of up to $2,000 each have been awarded to families with outstanding balances for the current school year, said Steven Levy, vice chairman of the federation’s day school council.

In New York, UJA-Federation has developed a cadre of financial consultants to help more than 70 day schools, synagogues and other Jewish nonprofits obtain government loans. The federation also established a new $2 million Day School Scholarship Fund for families facing financial hardship due to impact from COVID-19.

“They’ve also provided webinars that focus on different issues such as hosting virtual events and navigating solicitations,” said Suchoff, of the Milton school. “Our school needs the financial support of the community in order to continue pursuing our mission, which is to provide students an extraordinary Jewish education.”

This story was sponsored by and produced in partnership with Prizmah, the network for Jewish day schools across North America. This article was produced by JTA’s native content team. 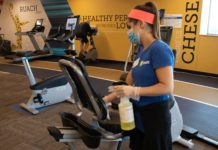 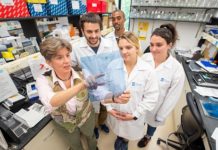