One day last week, my daughter got a hankering for homemade hummus. Hummus is pretty delicious, but the homemade version is a cut above, especially when you use celebrity chef Michael Solomonov’s recipe.

We decided to do a traditional Israeli hummus dinner, and, as we kicked around what toppings to use, we assessed the fridge and opted for a “use what we have” menu. We had a relatively small amount of a relatively wide array of vegetables, and salatim suggested itself. Salatim is the term used to describe the multitude of small plates of cold salad that are served in Israeli cuisine. If you have ever been lucky enough to dine at Solomonov’s Israeli restaurant in Philadelphia, Zahav, (or visit Israel) you have experienced these dishes at their best — a flavorful, fresh assortment of well-seasoned vegetables that are individual, unique, complementary, and utterly delicious.

We enjoyed the following salatim, and, just for a moment, if we used our imaginations and didn’t critique the food too harshly, we were transported to better days, sitting at Zahav with friends and family.

These portions were all fairly small, but they fed our hungry trio, along with the hummus and pita, perfectly. The dishes are easily scaled up for larger crowds. The cooked salatim can be served warm, chilled, or at room temperature.

Place cut eggplant pieces in a colander and sprinkle with salt. Let sit in the sink for about 30 minutes until the eggplant “sweats.” Rinse well.

Line a rimmed baking sheet with parchment. Heat your oven to 350 degrees.

Place the eggplant pieces in one layer on the parchment and drizzle them with 1/4 cup olive oil. Be sure that the oil hits each piece.

Roast the eggplant in the oven for 30-40 minutes until cooked through.

Remove the baking sheet from the oven. Heat a skillet with the remaining olive oil over low heat.

Pour the cooked eggplant into the skillet and allow it to slow cook for about 20 minutes. Remove from the heat when the eggplant is dark in color and very soft. Taste, adding salt and pepper if needed.

Heat your oven to 400 degrees. Line a rimmed baking sheet with parchment.

Place the carrots in a single layer on the parchment and drizzle with oil. Using your hands or a spatula, make sure all carrots have a coating of oil.

Sprinkle the carrots with salt and cumin.

Roast until the carrots are charred, about 30 minutes.

There are probably as many versions of this salad as there are cooks in Israel. The basic version is a composition of cucumbers, tomatoes, peppers, onions, fresh herbs, lemon juice, and olive oil.

I made one that used scallions instead of onions (they needed to be used or were going to have to be tossed), omitted peppers (didn’t have any), and included fresh mint from my garden. No complaints were heard.

Mix all the ingredients in a medium glass bowl. Allow the salad to sit at room temperature for about 30 minutes if possible to allow flavors to meld.

This dish was a symphony of flavors. It was plenty spicy; if you and your crew do not favor hot pepper, you can skip it, just using plain yogurt, or swap out the chilies for your favorite alternative .

In a medium saucepan, cover whole, unpeeled beets with water, and add a pinch of salt.

Bring the water to a boil, and simmer for about 30 minutes until the beets are cooked through.

While the beets cook, mix yogurt, chopped chili pepper, and another pinch of salt in a small bowl.

When the beets are cool enough to handle, peel and chop them into bite-sized pieces. (You can run them under cold water if you are in a hurry.)

When the beets are at room temperature, add them to the yogurt mixture. Stir, taste, and add salt, if needed. 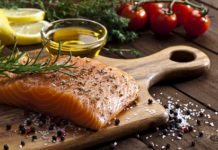 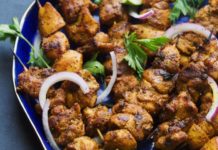 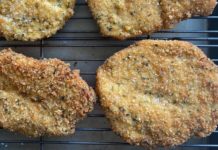