Sam Novey, 32, is giving his everything to make it easy for everyone to vote.

Novey, a member of Beth Am, is the director of the Full Participation Programs at the National Conference on Citizenship. There, he supports local programs, raises funds and designs new projects to engage voters. Prior to working at NCoC, Novey founded Mile 22 Associates, where he helped design programs to support student voting. He also co-founded the Baltimore Votes Coalition, a coalition dedicated to ensuring every Baltimorean is included in the political process.

Originally from Baltimore and now in Abell with his wife, Rebecca Hersher, Novey has been active with Baltimore’s Jewish community through Beth Am, Jews United for Justice, and Hinenu: The Baltimore Justice Shtiebl.

Tell us about the voting parties.

One thing I do for work is help convene a coalition of Baltimore Votes to make sure everyone can fully participate in our democracy. Our inaugural campaign in 2018 threw parties at polling places, with around 80 leaders. A number of Jewish organizations were involved. Baltimore Hebrew hosted one; Bolton Street hosted a great party, too. Repair the World did one. It was a huge success and people loved it. It’s a great way to welcome people to the community [to vote].

We were getting ready to do that again this year but clearly that couldn’t happen. So we built a campaign called Party at the Mailbox. Over 3,000 people signed up to get these boxes. People were having car parade parties to the polls, parties to the drop box and doing voter education work. And on election night we partnered with Black Girls Vote for an evening party. So that campaign wrapped up well. We’re figuring out what to do for the general election now.

Even so, there was a huge issue with people not receiving ballots in Baltimore. How did you guys tackle that?

We did a couple things. We invited the Baltimore Votes coalition to have a conversation about what was going on, and so that was good for both the board to explain the logistical constraints and the community to share how it felt. We also issued a list of demands to our state board about what was needed to rectify trust in the state.

The new order from the governor [to hold traditional voting] creates tremendous challenges for the administration next fall. We need an inclusive election that Baltimoreans deserve and have a right to, even amidst a pandemic with limited resources.

Why is voting so important to you?

I grew up here in Baltimore and was always involved in campaigns growing up for different politicians. One thing you learn is to knock on doors — but you skip the doors of people who don’t vote.

We’re supposed to be leading a democracy but even politicians who want to hear from everyone — particularly [in] a place like Baltimore, with a legacy of exclusion that we’re dealing with and the Jewish community needs to reckon with around race — we’re trying to find a way to make democracy inclusive.

Every community has people who are committed to participate. If we can get to know them, anything is possible.

You’ve connected this to Jewish values before. How?

One thing Jewish tradition does really well, even though we’re a tradition that values learning, we don’t predicate participation on that knowledge.

What Judaism really understands is you need to participate fully first. See yourself in the story first and then you’re able to learn about it and get engaged. We build a baseline of inclusion and then knowledge follows after, instead of knowledge being a barrier.

How does Baltimore’s Jewish community support you?

I’m a KSDS grad. My whole world was within the Baltimore Jewish community until high school. Since moving back here, the Jewish community has been a huge source of support for me. The synagogues hosting polling parties were helpful, active volunteers, and they do a lot of social network. Beth Am in particular has been an incredible space to think about these issues and connect with folks.

It’s also just so much fun. Doing this with the Jewish people of Baltimore has made it a blast. 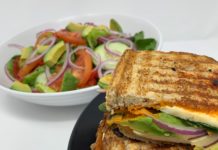