Movies can be a popular diversion from loneliness during the holiday season. We can escape our living rooms to ancient China in the new “Mulan” film, or shrink down to mouse-size with the friends in “An American Tail.”

“You can really get into a book, but when you literally see a visual on a screen, you not only get into the story, but you put yourself in that genre,” Mark Gross, 65, said. “You join that world with the actors and actresses.”

More than the films themselves, Gross is engrossed in the world of the characters behind the characters. He has a passion for interviewing celebrities, and he posts the videos on his YouTube channel, Celebrity Biograph.

Gross is a Reisterstown resident. He grew up in Pimlico and downtown, where he said Judaism was not prevalent in his house. “We didn’t have a lot of relatives,” he said. “No one wanted to talk with us with a Black stepmother in the house. And we were in the city. So I just studied and learned during my bar mitzvah.” Now, though, he said he likes that being part of the Jewish community is like being part of a tribe.

Gross’s solitary study of Judaism is similar to how he found his niche passion on his own. “Because of how I grew up, I was pretty much on my own and would watch TV after school,” Gross said. “I loved sci-fi and adventure action films.”

Formerly a writer for Autograph Collector Magazine, Gross would obtain press passes and interview celebrities at fan signings. These chats spurred material for his column and later for a radio talk show in 2001.

“Getting to meet them in person, for just a few seconds, you get to hear and see them,” Gross said. “You get a one-on-one close connection with the person who starred in something you watched. And for me, I get to get behind the scenes and interview them, too.”

Gross doesn’t overthink the meetings. “I make up questions as I go along. Celebrities like that better than me holding up a piece of paper and listing off questions. A lot of media is too scripted, or they ask stupid questions. So I stay away from paparazzi questions,” Gross said. “We’re just talking.”

His favorite question to ask is what it’s like to receive attention from hundreds of fans waiting in line simply for a signature. He also loves to find out their quirks and what they collect. “A lot of them like to see and talk about the tattoos that people have of them. And I’ve gotten into long conversations about their pets,” Gross said. “They like the same things we like. They just have a little more money to do it.”

One of his most memorable celebrity meetings was with the Fresh Prince himself. Jada Smith, Will’s Smith’s wife, had been visiting Baltimore, her hometown, for Mother’s Day. To everyone’s surprise, Will Smith came, too. Their security allowed press to come in for photos for a quick five minutes. As everyone was leaving, Gross held the door open for the other journalists and then closed the door on them. Will Smith was impressed with his maneuvering. “Will said, ‘Nice move, kid, go on and come over, we can talk for a few minutes,’” Gross recalled.

Other noteworthy interviews he’s done include some of the actors from one of his favorite shows, “Star Trek.”

He would still like to meet James Earl Jones, the voice of Darth Vader; Johnny Depp and more.

But recently, these opportunities have been unavailable.

“All the conventions this year have been canceled,” Gross said. “I’m very disappointed and saddened that COVID has celebrities not coming out and people not coming together. That affects writing because I can’t cover it anymore, and [the pandemic has] stopped my photography opportunities for graduations, and I part time pet sit, and the clients all cancel, too, because they have nowhere to go.”

Along with work, the pandemic has caused Gross to miss his friends, karaoke and the nuances of social life.

“I miss being able to flirt with a woman and know what she looks like behind a mask,” he laughed.

On the bright side, Gross hopes that the new year will bring more positivity.

“I just think, next year could be better because everyone will put this behind us and be so joyful and excited to experience their lives like they were able to before,” he said. “The camaraderie and passion people have for other people will be even greater.” 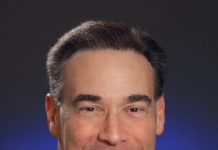