Cannabis used to connote hippies, the ‘60s, and the word “dude” itself. But these days, what used to be a laughing matter is a serious medical treatment, which Jacquie Cohen Roth is working to educate the community about.

Cohen Roth, 60, lives in Annapolis. Over the past 30 years in Annapolis, she’s been a member of Congregation Kneseth Israel, Congregation Kol Ami and Temple Beth Shalom. She now attends services at the Friends of the Jewish Chapel at the United States Naval Academy.

She grew up in New York state. She was always drawn to the idea of tikkun olam, and medicine seemed the best way for her to practice that virtue.

“My dad was a chief medical officer of the community hospital,” Cohen Roth said. “Being a physician in the ‘60s was less common for a woman. People would say, ‘You can be a nurse and help your dad,’ but I said, ‘No. I’m going to be a doctor and his boss.”

Cohen Roth’s educational background has helped her greatly with her entrepreneurial goals. She founded magazines around the Maryland region with her first company, Mojo Media.

“I was introduced to cannabis as a teen, but now I understand I was self-medicating. Always responsibly,” she noted. “I educated my kids that it’s illegal [recreationally], but medicinally can be used to treat so much.”

She founded CannabizMD in 2017 to build an ecosystem inclusive of patients, health care providers, scientists, regulators and policy influencers to support Maryland’s nascent medical cannabis industry.  In 2019, she launched a social enterprise called Tea Pad, which aims to break down barriers into the industry and to empower access via education. She created an advisory board inclusive of people of color. “Not unlike most industries, here it is white men who control the industry,” she said. “They have access to funding that women and people of color do not have.”

Cohen Roth took her background in policy, law and technology and applied it to the new platform.

“As a business owner and entrepreneur, policy plays a critical role, as does understanding economics for strategy,” she said. She’s used her knowledge to speak in global conferences and grow a business network to support wellness and the cannabis industry. “I’m applying everything I’ve studied and done,” she said.

Cohen Roth is passionate about the business and eager to share what she’s learned.

“It’s a medicine that goes back 5,000 years. It became outlawed in the 1930s because of racial prejudice,” she said. “I start having a visceral reaction when I talk about the racial prejudices behind our policies, because my grandmother was a Holocaust survivor, one of five in her village. She had the choice of have your throat slit or leave. So she chose to leave.”

Cohen Roth said medical cannabis is not recommended often because stigma remains about its use as adjunctive therapy, and the majority of physicians have not been educated about its practical, proper uses. “Not being trained in the endocannabinoid system is like skipping over the cardiovascular system in your clinical education,” she said.

Therefore, her business focuses on education. She holds events and conferences to teach patient, physicians and industry stakeholders. Most recently, on Oct. 3, she hosted The Cannabis Science and Therapeutics Provider Education Forum, where attendees learned about how cannabis can helps chronic pain, senior citizens, PTSD in veterans, and seizures in children.

Outside of her work, Cohen Roth likes to dedicate time to celebrate her family and faith.

Cohen Roth, who has served on a synagogue board made sure each of her three daughters had a bat mitzvah. Because the Severna Park community where she raised her family was less saturated with Jewish culture, Cohen Roth brought Jewish culture to them.

“Every Jewish holiday, I’d bring the kids traditional food to school to share,” she said. “I would bring in latkes and taught the kids how to play driedel.”

Each Passover, Rosh Hashanah and Chanukah, she hosts a party with some family and her neighbors. “The neighbors who are 81 and 101 came, and we all played driedel together. We had so much fun. The gentiles really cleaned up. They knew how to party.”

As for where she currently attends services, Roth Cohen described the Friends of the Jewish Chapel at the United States Naval Academy as a “powerful place.”

“There are rows that are sectioned off, which each represent a different branch of the armed services,” she said. “The rabbis rotate; they’re commissioned officers in the Navy themselves. And at the Shabbat services during the more recent wars in the Middle East, they would share the name a member of the services who had died that week.” 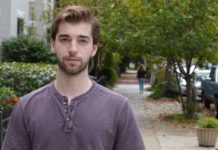 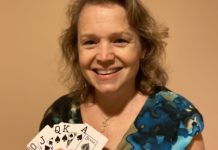 Ante up for the IDF: Jennie Schwartz