Kids love it because the meat is tender, adults love the complexity of the flavors and, most importantly, the cook loves it because you just throw everything in the pot and leave it alone for 4 hours.

This can also be done in a slow cooker, but the instructions below are for an old-school oven braise.

Topping the finished pot roast with chopped parsley gives a burst of freshness to this hearty dish and adds a nice visual dash of bright green when you serve it.

Since the vegetables are all contained in the pot, you don’t need much in the way of sides — a loaf of crusty bread and a bottle of dry red wine complete this meal beautifully.

“Why is it called Yankee?” I wondered. Some research revealed that the cooking technique was brought to New England by French immigrants in the form of etouffe and was adapted to local ingredients.

The name may be a nod to the stereotypical frugality and ingenuity of New Englanders: The recipe takes an inexpensive cut of meat and patiently braises it to tender deliciousness. The long winters of the region necessitated warming comfort foods, and cooking the dish slowly over several hours served the additional purpose of heating up the kitchen.

The inclusion of vegetables is also said to be a tradition of the New England, or Yankee, version — perhaps as a clever way to stretch the meat and cook the meal with maximum efficiency and minimum effort.

Heat your oven to 275 degrees. Generously sprinkle the roast with salt and pepper.

In a large Dutch oven, heat the oil, and sear the beef on all sides. Remove it from the pan, and add the garlic and onions, scraping up any browned bits.

When the onions and garlic are fragrant, place the beef, along with any drippings, back in the pan. Add the vegetables, broth, wine, thyme, rosemary and bay leaf. Cover and place it in the oven.

Roast for about 4 hours until the meat is falling apart. Remove the bay leaf. Sprinkle parsley over the pot roast just before serving.

Keri White is a food writer in Philadelphia. This originally appeared in the Jewish Exponent, an affiliated publication of the Baltimore Jewish Times.

I tried Chanukah foods from around the world 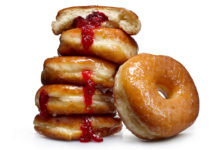