On the first day of Rosh Hashanah, it’s not uncommon to see Jews tossing little bits of paper into lakes or rivers. These scraps float for a moment, then become soft in the water, finally sinking down to the dark bottom.

It is the water itself that brings the papers down, though the words contained on each are like stones in the heart of the writer.

The messages are confessions, and the ceremony is called tashlich.

Though no mention of the tradition is made in the Talmud, tashlich has become for some an important way to confess their sins just as the new year begins and as Yom Kippur waits just days ahead. Why this is done at bodies of water is likely the result of a verse in Micah 7:19, which speaks of “casting tashlich…sins into the depths of the sea.” Later scholars also liked to note that the confessions of wrongdoing could be seen only by the fish who, like God, have eyes that never close.

At Sukkot, we build and decorate sukkahs. Before Pesach we clean, buy matzah, clean, buy more matzah and yes, clean. At Purim we wear costumes and scream at the name of Haman. At Shavuot we celebrate with homemade Torah scrolls and cheesecake. What, then, are the specific traditions for one of the most important of all Jewish holidays, Rosh Hashanah?

An Apple A Day…

The most popular is, of course, dipping apples in honey. Here’s the story behind this delicious activity:

The honey is all about sweetness, of course.

The apple was selected because of its abundance throughout the ancient land of Israel. The Torah, the Talmud, rabbinic and kabbalistic literature all mention—and praise—the apple, an honor accorded no other fruit.

When the apple is dipped in the honey, this pronouncement is recited:

“May it be Thy will O Lord, our God and God of our fathers, to renew unto us a good and sweet year.”

Lettuce Tell You About This!

In some Jewish homes, Rosh Hashanah also is the time to serve up a rather strange assortment of foods, selected specifically not for their taste, but for the symbolic significance in their name, usually a play on words. The idea is to usher in a new year with positive thoughts.

Sometimes, the message is quite serious; a family may have a peach (afarsek in Hebrew), for example, to symbolize the plea, “Forsake us not.”

If you’ve never done this project, give it a try. Once you get started, it’s hard to stop.

One bit of advice: while it may be tempting to include almonds (for, “May my children not drive me nuts…”), note that it’s traditional not to eat nuts at Rosh Hashanah. Quite often as people eat nuts, particles of chewed nuts lodge in the throat and cause coughing. The ancient rabbis were concerned that Rosh Hashanah, when there’s a large volume of prayers to be recited, should not be a time when people have mishaps that may hinder their ability to vocalize. Also, some try to avoid nuts because the numerical value of the Hebrew word, egoz, is the same as that of sin, het.

You Say Tomahto, I Say Tomato…

Chances are you have been wishing your friends, family and acquaintances the same greeting all these years: “May you be inscribed for a good year (in the Book of Life).” This is fine, providing everyone you know has ancestors from eastern or central Europe.

This traditional Rosh Hashanah blessing has for many years been said among Ashkenazim. But Sephardim have a different version: “May you be inscribed for a good year; may you be worthy of abundant years.”

Why Two Is Better Than One

Although Rosh Hashanah lasts 48 hours, in fact the ancient rabbis said it is just one day. Why? Many years ago, the rabbis declared the day was a yoma arichta, Aramaic for “extended day.” So even in Israel, Rosh Hashanah is observed for two days. But here’s where the similarity ends. Go to Israel and you’ll have just one seder for Pesach, while here in the diaspora we have two, and it has nothing to do with extended days. In this case, it’s a matter of sfeka di-yoma, or doubt about the day.

Before the Jewish calendar was fixed (in 358 CE), the Sanhedrin in Jerusalem announced the beginning of each new month based on astronomical observations. The news was then sent by messenger to the rest of the world. While within the land of Israel one could be rely on timeliness of the couriers’ announcements, Jews in the diaspora had their doubts, so just to be on the safe side these communities began observing two days of the holiday.

Why It’s Not In The Cards…

Just as gift-giving at Chanukah is a custom that arose solely because of its proximity to Christmas, so, too, is the sending of cards at Rosh Hashanah based on the practice of Christmas cards. While it’s nice to wish others a happy holiday, there’s nothing in Jewish tradition that directs us to send greeting cards.

On Rosh Hashanah we hear the clear, unmistakable sounds of the ram’s horn—but did you know it didn’t have to be exactly that?

Certainly hearing the shofar itself is a mitzvah, or commandment

(Leviticus 23:24, Numbers 29:1.) Though the Torah tells us we must hear the sounds of the shofar, it doesn’t tell us specifically why—though many have offered possibilities. Many scholars say it is like the sound of a trumpet heralding the king—in this case, God the king.

Interestingly, however, the Mishnah says that the horn of a goat or antelope also may be used. Later, the tradition of using solely a horn of a ram arose to harken back to the ram which God substituted for Isaac, when Abraham was prepared to sacrifice his son (and this episode is one of the Torah portions we read on Rosh Hashanah).

A Holiday By Any Other Name…

Its most popular name is, of course, Rosh Hashanah, or “head of the year.” But this day also is called Yom HaDin (Day of Judgment), Yom HaZikaron (Day of Remembrance) and Yom Teru’ah (Day Of the Shofar Blast). 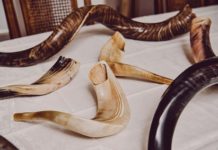