Whoever said being a kid was easy must have a poor long-term memory. Trying to navigate the big world without much experience is a lot harder than it looks. Camp offers a unique opportunity to practice many of the skills of self-preservation that will come in handy later on. I’ll never forget one of the first times I stuck up for myself in a hurtful social situation.

I was about 14 and away at camp for the first time. It was the 1970s and supervision was pretty lax at the hippy camp in Upstate New York where my parents sent my sister and me. I was a newbie, a first-time camper who came for the second session. Most of the other kids were there from
the beginning of the summer, and many of them had been attending the camp since they were 6 or 7. A girl in my bunk would sneak out most nights to meet up with her boyfriend. On one occasion, she brought the boyfriend back to the bunk when she assumed all of us were asleep. I had trouble sleeping most nights and was wide awake when they entered. I pretended to be asleep though. The boy came into the bunk and looked around. “Who’s that,” I heard him ask, referring to me. “It’s a new girl. She’s stupid,” replied my bunkmate. Then the two of them left.

All night long, I lay awake fuming and thinking about what I should have said. The next morning, I got up the nerve to confront her. I told her that I had heard them, and I pointed out that she should’t say I was stupid since she hadn’t made an effort to learn about me. I don’t remember exactly what she said, but I do remember she was flustered and embarrassed. And I think she apologized. Things got better for me after that. I gained her respect, and by extension, I gained the respect of the other girls in the bunk. By the end of the session, I was beginning to feel like one of the group.

Nowadays, sneaking out of the bunk at night is a major offense, and mean behavior among campers is strongly discouraged. That doesn’t mean it never happens, but it does mean that most camps make strenuous efforts to prevent it. Counselors are trained to handle conflicts between campers, and victims are taken seriously when they ask for help. In this issue, iNSIDER looks at how today’s camps attempt to create bully-free zones so that every camper can enjoy his or her summer camp experience. At the same time, camp remains a wonderful place to practice social skills, make relationships and build self-confidence.

This month’s iNSIDER also looks at a new program specially designed for Russian Jewish campers, and also visits area yoga camps, and gets a taste of today’s camp food trends. 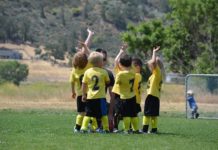