Taylor Gonzalez refuses to be a bystander in life — being in on the action is just too rewarding.

“I always want to challenge myself,” Gonzalez said. “The bare minimum is never good enough for me.”

The 28-year-old completed her undergraduate studies at Florida State University, where she obtained bachelor’s degrees in religion and international affairs. She received her Master of Science in education from Johns Hopkins University.

Just shy of five years ago, the Miami native traded in her flip-flops for snow boots. She settled near the heart of Baltimore and began working as a site coordinator for Reading Partners, an AmeriCorps program that helps students reading below grade level. Gonzalez worked one-on-one with children attending Friendship Academy at Cherry Hill until summer 2013.

Her passion for education prompted her to take the next step in her career — becoming a Teach for America corps member with Baltimore City Public Schools. The vivacious teacher was a 2014 finalist for the annual Sue Lehmann Excellence in Teaching Award, which recognizes transformational teachers. After completing two years in the classroom, Gonzalez stayed on board with Teach for America, securing a spot on its recruitment and admissions team. She recently celebrated her four-year anniversary with the nonprofit organization.

Gonzalez has proven to be a fearless activist both in and out of the classroom — especially in the Jewish realm. The staunch supporter of Israel has applied her leadership skills as a youth leader for AIPAC and a member of the Baltimore Jewish Council’s leadership development program. When anti-BDS legislation made its way to the state Senate floor in March, Gonzalez said she felt obligated to testify in favor of the bill.

The young professional’s busy schedule didn’t stop her from throwing a yoga practice into the mix roughly six years ago. Once a week, passers-by can spot Gonzalez teaching in Federal Hill Park and various locations throughout the city this summer.

Why did you join Teach for America?

No matter what sector of our society you look in, whatever inequity it might be, it all boils down to education. When I found out about Teach for America and its mission — developing leaders who are passionate about our education and equity — I just thought, “Wow. This is the organization for me.” Now, I work for their professional recruitment and admissions team. I’m the go-to contact for anyone who wants to join — whether they’re six minutes out of undergrad or 60 years out of undergrad. I do everything from conducting interviews to helping navigate which region is going to be the best fit for those professionals. One of the special things about Teach for America is their emphasis on professional alignment and personal alignment.

I don’t care which way in the political pendulum you swing, as long as you’re pro-Israel. That’s the one thing I can’t bend on. When I saw that this bill was in the Maryland legislature, I felt that I needed to go stand up and be that role model that I’ve taught my students to be. As a teacher, my biggest vision for my students was that they would be global citizens who can advocate for themselves.

How did a yoga practice find its way into your life?

I started my yoga practice on and off in 2011 and became very dedicated at the beginning of 2015. When the opportunity presented itself, I knew that it was the natural next step to deepen my own practice and be able to share it with others.

What motivates you to be involved in different aspects of the community?

If not I, then who? That’s something that has always been a compass for me. And I think that’s why I became a teacher. I like being a part of something that’s bigger than myself. I want to leave the world a better place than how I found it. 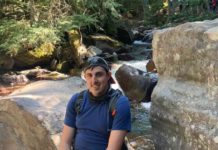 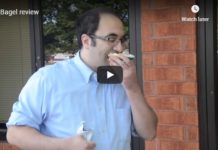