Karina Mandell has always been invested in her community. And now, after becoming a resident at Moishe House in Baltimore, she’s investing directly in the city’s Jewish community, too, by living in the house that serves as a meeting place for the city’s young Jewish population.

Born in Ukraine, Mandell came to the United States when she was 8 and attended Beth Tfiloh. The 28-year-old was already living in Baltimore when she moved into Moishe House nearly two months ago.

What brought you to Moishe House in Baltimore?

I had friends in the house over the last few years, but it never coincided with my lease. Part of why I wanted to be in Moishe House is because I want to build a bridge between the Jewish community and the rest of the secular community. Not to dilute our own Judaism, but to let others have an opportunity to see in. I want an opportunity for us to shake hands and reach across the aisle to know about each other.

What do you hope to bring into the home?

I hope to show that somebody who is culturally Jewish can still be part of the Jewish community. People sometimes think that because of the name they aren’t religious enough to live here. This is something that I think shows you can have a Jewish life and not be drinking from a firehose.

Tell me about your Jewish background.

I was raised Conservative. To me, I don’t know if I’m redefining what the labels mean, but I’ve sort of become disillusioned with the labels. I would rather go plant a tree on a Saturday morning than be in synagogue. I would rather go do the things than talk about them. That’s a big part of why I say I’m culturally Jewish. I feel like it’s more of a generational thing than a religious thing. I’m not moving into a Jewish house to become more Jewish. Some other people might if they want to entrench themselves more. I view it as an opportunity to redefine 21st-century Judaism and Jewish identity.

What do you like to do in your spare time?

I like to go to events around town. It could be anything from Light City or a lecture or discussion. Living in Baltimore City, to me, means that I’m not just focused on Jewish issues. I’m very much about if Baltimore’s doing well, then the Jewish community will do well by extension. I want to see that my kids and not just Jewish kids are going to schools and private schools that have water and heating, but that all schools have them. If we save one life, it’s as if we’ve saved the whole world. I’m much more activist about the way I define repairing the world and tikkun olam.

What are some examples of activism you’ve been involved with?

A few years ago, I organized a march to City Hall as class president of the social work students with the law students at University of Maryland Baltimore when the Freddie Gray protests were happening. I wish the Jewish community would have stepped up more.

I was an intern with Sarah Mersky and the Baltimore Jewish Council, where I worked in Annapolis to lobby for paid sick leave and funding for Holocaust survivors, among other things. I went to the Women’s March and the March for Our Lives. I also did a presentation at the Women in Techmakers conference to promote Baltimore not just as a tech city but a healthy, green, smart city.

Currently, I’m working on a major economic development project in Baltimore that creates jobs, teaches STEM education and reduces food deserts. We do this by building America’s first seafood hatchery, including a vertical farm and attracting other green tech companies to our city by the bay.

I think part of us being in the community and engaged with Baltimore, there’s a chance that people will resent us. I’ve been in rooms where people will talk about Jewish people as if they’re not there. They’ll say, “They just want to be by themselves.”

You have two vacancies opening up at the house soon. Why should people apply?

It gives them an opportunity to define what they want the Jewish community to look like in Baltimore. 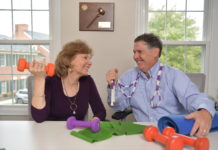 The Last Word: Brian and Lisa Jolles promote health and wellness for 33 years

Book-lovers set up libraries around town