It was four years ago this March that a three-story, 20,000-square-foot building modeled after the magnificent Persian palaces of ancient Iran, was dedicated. The building, located on the corner of Fallstaff Road and Park Heights Avenue, at 6813 Park Heights Ave., is known as Ohr Hamizrach Sephardic Center.

The shul is named for Rabbi Herman N. Neuberger, who is credited by many Iranian Jews in Baltimore and around the country for being instrumental in the exodus of hundreds of young Persian Jeish men from the Islamic and fervently anti-Zionist republic. It’s a $3 million facility — equipped with a 250-seat sanctuary, a 150-seat women’s balcony, a social hall, a senior center, classrooms, an office and a bais medrash —  and today, it is even stronger than was hoped, said Daniel Golfeiz, who serves as shul executive director.

On any given weekday, as many as 50 people can be learning in the bais medrash, Golfeiz said. There is always hot tea in the urn — “you give a Persian tea and he is very happy” — and the hall is regularly rented for area bar and bat mitzvoth and the like. On the High Holidays, the synagogue is packed. Some 400 people will throng to the shul from as far away as Silver Spring.

But the physical structure is not what makes Ohr Hamizrach a gem of the Park Heights corridor, explained Golfeiz. Rather, it is the light emanating from the people who use it.

On one hand, the shul was built out of necessity; the small houses in which the people had been praying beforehand were bursting at their seams. On the other hand, “we wanted to improve the self-esteem of our kids, give them a sense of belonging,” said Golfeiz. “Our members feel better.”

The facility serves a dual role of being both a place of prayer and a place of learning and programming. There are get-togethers for the elderly who only speak Farsi. There is Shabbat programming for the youth to help them better understand their Iranian heritage.  Ohr Hamizrach has played host to Persian music concerts and communitywide Shabbat meals, bringing the Iranian Jews together to celebrate their heritage and each other.

But the clergy and staff want — need — to be doing more, Rabbi Golfeiz explained.

“We have the mortgage, so we can’t do what we need to do, we can’t really be there for the children and the elderly like we should. We are trying to get there,” he said.

Golfeiz explained that they can right now only run programs that pay for themselves because there are no extra funds. He fundraises outside Baltimore and from local, wealthy Persian entrepreneurs, but it is just enough to handle the overhead.

“Iranians are quite amazing people,” said Dean Lawrence Katz, who was instrumental in securing the seed funding that made Ohr Hamizrach possible. “Iranians are very entrepreneurial and energetic, not lazy people by any stretch of the imagination. They have butcher shops and cleaning shops and restaurants. The next generation is going into professions. They are going to make it. It takes time, of course, but there is no doubt they will become givers as opposed to takers.”

In the interim, Golfeiz says they are looking for help. Some of the elderly don’t speak English, and he wants to do more for them in their old age. In addition, he wants to continue to boost the pride and prestige of Ohr Hamizrach so that wealthy, successful Persian Jews from Great Neck, N.Y., and Los Angeles will see Baltimore as an alternative place to raise their families.

“Baltimore never did for the Persians what it did for the Russians,” said Golfeiz. “This is the community’s chance to help.”

Ohr Hamizrach will host its annual dinner honoring Mr. and Mrs. David Cohen on Feb. 10 at 7:30 p.m. in the center’s social hall. Couvert is $200 per person. For more information or to make a reservation or donation, call 410-358-0661 or email [email protected] 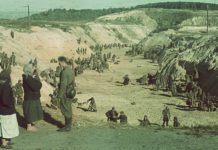