Broaching the subjects of suicide or depression with a loved one can be a difficult task. But on Wednesday night, Chizuk Amuno congregants and community members filled the Esterson Auditorium to learn about strategies of compassion and understanding for those who need a helping hand.

Chizuk Amuno’s Rabbi Joshua Gruenberg, though not a health care professional himself, opened the discussion with some thoughts about the specific importance of such a panel to Jewish communities.

“If, as a religion, as a Jewish community, we are to remain relevant in modern, changing times, we need to have appropriate and meaningful and connective responses to all of the most wonderful and difficult moments that occur in somebody’s lifetime,” Gruenberg said. “But unfortunately, for a long time in our Jewish communities, around the issue of suicide, we not only didn’t have a meaningful, relevant response, we actually sort of brushed it under the rug.”

When identifying and caring for those with depression and suicidal thoughts, he said, the key is “to bring them in, to pull them closer, to connect to them.”

The evening’s panel included Kat Olbrich, the Maryland director of the American Foundation for Suicide Prevention; Stacey Meadows, a supervisor for therapy services with Jewish Community Services; Howard Reznick, the manager for prevention education for JCS; and Rachel Abrams, a clinician and grief counselor for JCS.

Olbrich spoke about the importance of language when it comes to discussing suicide with those struggling with depression, and urged the audience to approach it as a health issue. Audience members gasped when Olbrich shared statistics on suicide, including the fact that 44,965 Americans die by suicide every year, which equals about 123 suicides every day.

Meadows talked about the importance of erasing the stigma around discussing personal difficulties. She relayed an anecdote about a close friend of hers who, after spending no more than 15 minutes discussing his recent troubles, apologized for burdening her. “We perpetuate this idea of burden when we say, ‘It’s not OK to be bad. Don’t tell me the stuff that’s hard. I only want the good parts,’” she said.

Resnick, speaking specifically about dealing with depression in teenagers, addressed the parents in the audience. “We do not control our kids,” he said, “as much as we would love to.” Parents and trusted adults need to find ways to meet their children where they are, he said, and provide them with opportunities to find the people and activities that affirm them as worthy of love and compassion.

Abrams discussed her work with people whose loved ones died by suicide. Her work, she said, was not to encourage people to “let go” of the people they’ve lost, but rather to acclimate themselves to their absence (a key distinction, in her view).

Following the remarks from the individual panelists, anonymous questions submitted by the audience were discussed, on topics ranging from Jewish practices regarding suicide to the grieving process.

Ruth Brown, a Chizuk Amuno congregant, found the discussion to be informative and encouraging. “The speakers were so knowledgable,” she said.

Jonathan Carter, a community member, felt the same way. “It shows that the community realizes it’s an important topic.” 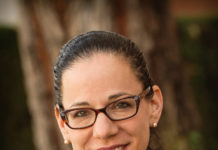