I produced this meal on a warm Rosh Hashanah afternoon in September for 10 hungry Jews, ages 8 to 80 — and the adventurous 8-year-old was the one most avidly gobbling up the stuffed peppers. Served with a simple green salad, a platter of end-of-summer tomatoes, and a crusty baguette or a round challah to mark the holiday, this makes a beautiful and uncomplicated spread that can be prepared in advance and served with ease.

Nothing about this dinner party plan is difficult, but good food takes time and planning. This menu of related dishes will feed a crowd and still leave you free to greet your guests with all of the food ready to eat, no last minute fussing, and enough variety to appeal to a wide range of palates.

In fact, this whole meal can be assembled the day before (as I did), and heated up the next day. The flavors will only deepen and marry, and the cook will be much more relaxed when company arrives. All the leftovers reheat well (or taste good at room temp) and travel easily in a lunch-box, making this good picnic and potluck fare as well.

The charred stuffed poblanos can be prepared two ways — Southwestern with cheese or Middle Eastern with tahini. Either way, they provide the requisite amount of spice to fuel a low simmer that lingers with each bite, while the rice casserole has all the richness but none of the heat. The sweet and pungent, tomato-based Peperonata sauce complements either choice.

Think of peperonata as the perfect accessory, like a woman shopping for a little black dress — without the right shoes and handbag, you still don’t have an outfit. Any tomato sauce would be a fine accompaniment, but this particular one reprises the flavors of summer and celebrates the glorious bounty of the fall harvest.

Tip: Recipe amounts and ingredients are very forgiving. If banana peppers are not available, sweet green or red bell peppers or cubanelles are fine. If you can’t find fresh Roma tomatoes, canned tomatoes work well. The rice filling can be prepared without the veggie ground burger or with whatever size package you have and still be delicious. These recipes can easily be doubled, but use the same amount of rice either way so there will be enough left over for a separate rice casserole.

3 poblano peppers, prepared according to directions, then halved

3 Poblano peppers, prepared according to directions,

¼ tsp. each ground cinnamon, cloves and cardamom or 1 tsp. allspice

½ tsp. each paprika and

1 large onion, halved through root and sliced into thin wedges

½ cup each tahini and water

1. Place whole peppers on a baking sheet under the broiler and roast until skin begins to char and blister — 3 to 4 minutes on each side, turning and checking frequently. Use a timer to prevent over-cooking.

2. Place in a closed paper bag for 5 to 10 minutes so that condensation loosens the skins. Most of the skin will peel off easily but they do not need to be washed.

3. Halve, seed and de-rib peppers, taking care not to touch your eyes, and spread softened halves on lightly oiled baking sheet or shallow pan in preparation for stuffing. Don’t be alarmed if peppers wilt and collapse completely; the rice will pack into (or onto) them and bind together, with the peppers serving as a base and giving up their juices during the baking process to flavor the filling.

4. Pack prepared peppers with rice mixture. For Southwestern Peppers, sprinkle each with 1 tbsp. shredded cheese. For Middle Eastern Peppers, drizzle with tahini sauce and sprinkle with a dash of paprika.

6. Place remaining rice in an oiled, covered casserole dish and bake for 25 minutes, covered. Uncover and bake for 5 minutes.

1. Rinse rice in a strainer under cold water. In a large saucepan, add water, turmeric and a good pinch of salt, and bring to a boil. Reduce heat and simmer for 30-40 minutes until tender. Let stand covered, another 10 minutes, then uncover and fluff with a fork.

3. Add 1 tbsp. oil and veggie ground burger and sauté until browned and well mixed with veggies.

5. Add cooked rice and stir to combine. When rice has cooled enough to handle, mix in shredded cheese.

1. Rinse rice in a strainer under cold water. In a large saucepan, add water, spices, and a good pinch of salt, and bring to a boil. Reduce heat and simmer for 30-40 minutes until rice is tender. Let stand covered, another 10 minutes, then uncover and fluff with a fork.

2. Meanwhile, heat 2 tbsp. oil in large, cast iron skillet over medium-high heat and sauté peppers, onions and garlic until veggies begin to color. Add raisins, salt, paprika and cumin and continue to cook until veggies and raisins begin to soften, about 5 to 8 minutes, stirring often. Add tamari sauce, stir through and remove from heat.

Peperonata sauce: While rice is cooking prepare sauce, using two skillets or cooking in batches to keep veggies from steaming rather than sautéing.

2. Add tomatoes, cover and cook for at least 30 minutes, or until tomatoes have released their juices and begun to disintegrate and peppers are plump and tender. Season with salt, pepper and oregano and continue to cook until desired consistency is reached. If sauce is too thick, thin with a little water, white wine or dry vermouth. 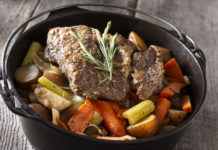