It was a little chaotic getting all three members of the band Distant Cousins on the phone the day before Thanksgiving, but they made it work, even as one of them, Duvid Swirsky, talked on his car’s speakerphone with the antic chatter of two 6-year-old boys in the background.

The L.A.-based trio, all thirty-something parents of young children, is used to creative collaboration — they’ve released two EPs together and their first full-length album, “Next of Kin,” is out this week from Julian Records.

Despite the indie folk/pop band’s name, members Dov Rosenblatt, Ami Kozak and Duvid Swirsky are not actually related. But their Jewish backgrounds and musical pedigrees tie them together: The Baltimore-born Rosenblatt, whose late grandfather Morris was the legendary rabbi of Annapolis’ Congregation Kneseth Israel, was the lead singer of the rock band Blue Fringe, while the Israeli-American Swirsky, who started playing music as a teenager with Rabbi Shlomo Carlebach, was a founding member of the band Moshav.

Composer/producer Kozak, who hails from Englewood, New Jersey, and studied at the Berklee College of Music, has penned music for brands like Hallmark and Toyota as well as for tourism campaigns in Michigan, San Diego and Dallas. He was a fan of both Blue Fringe and Moshav before he started collaborating with his bandmates.

Even before their first full-length album came out, the band’s folksy, jangly, pleasingly catchy songs have been heard on feature film soundtracks, TV shows and commercials. There’s something universal about their melodies, even as they remain influenced by Jewish tradition.

How do you navigate issues of Jewish identity and music-making, especially with this new album, which isn’t overtly Jewish in its content?

Dov: We address that question head-on on the album in the song “In My Blood.” As far as how we navigate it, I think we fully embrace it. We’re really appreciative of the support of the Jewish community that we live in and who come to our shows. Within the music, we try to make our songs really authentic and personal. So [being Jewish] is who we all are, that is how we grew up, that is the community we’re part of.

Ami: We’re proud of our Jewish identity. We don’t try to shy away from that. The music doesn’t have the same parameters you find overtly in Jewish music, but at shows, if it’s the right time of year, we’ll play some [Jewish] holiday music and we’re open to our crowd about who we are. The outside world will embrace you if you stay authentic to yourself.

How have your fans reacted to the new sound?

Dov: We just got a funny comment on our YouTube video on the song “Lights On.” He said, “It sounds awesome even though it doesn’t sound very Jewish.” He was trying to call us out on it. But we’re not trying to be. This is who we are and this is the music we’re trying to make.

“Lights On” has actually been characterized by some as a Chanukah song.

Dov: The whole idea of the song is really about the miracle and getting the miracle out. But at the same time, it’s also about turning on your own lights and being proud of who you are.

Duvid: On a small level, Chanukah is about the Jews winning. But what it’s really about is that feeling of not needing to hide what you’re really about and being one with who you really are. So maybe the song is about Chanukah.

Dov, can you tell us about your Jewish Times cover photo?

Dov: Because my father [Gary Rosenblatt] was the editor of the JT back in 1983, I got to be on the cover as a 2-year-old and that was seemingly really sweet. But what I didn’t know at the time was that it was supposed to be my older sister and for years that would be a point of contention without me even knowing. I think like last week we’ve gotten over it and now we’re close, but it took a while.

What does this album represent after doing two EPs?

Ami: The EPs were kind of experimenting with the different range of our style. This album is the culmination of finding that sound that we feel is our own. While there’s a lot of variety stylistically, there’s a common thread: There’s a lot of three-part harmony fused with modern pop production. We also found a really good balance between what we do in the studio and what we do live — a really authentic, raw, organic sound in the studio as well as bringing the studio to the live show.

Several of your songs have been used in movie soundtracks and on commercials. Does that influence your approach to songwriting?

Dov: The very first song we worked on went straight to a movie called “Coffee Town.” So we did get thrown quickly, in a good way, into having songs in films and commercials. A good litmus test is whatever song we’re writing, if we can just sit at the piano and just play it and sing it or on the guitar and it works, then we’re happy with it.

Ami: The commercial TV world is always attracted to uplifting, positive songs that have universal messages. If you work hard on writing songs that work from the heart, they generally work in that world, too.

Duvid: Writing for TV and film is just a great way to get your music to more ears these days. The music business is changing so much and I feel like all the artists are constantly searching for new ways to reach audiences. It used to be frowned upon to have your song in a commercial, but these days we’re just searching for ways to communicate. People hear your song somewhere and then they come to your concert and then you make a personal connection with them.

Where can audiences see you these days?

Ami: We’re planning our tour for this album and we would love to come to Baltimore and meet fans face to face and perform. If fans want to hear us, reach out on Facebook or on the website distantcousins official.com, and we will make our way. The love and support from our Jewish family is always appreciated, and we have a lot of gratitude. 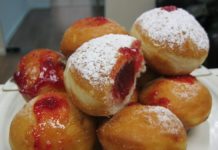 Why Do We Eat Jelly Donuts on Chanukah? 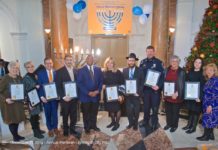 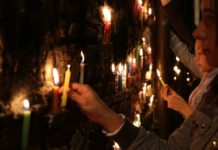