A team of Bais Yaakov high school students competed against more than 1,200 male and female students to rise to the top for the finals of the Center for Initiatives in Jewish Education (CIJE) “Shark Tank”-like event held in New York last month. CIJE promotes STEM and engineering education in Jewish schools.

The Bais Yaakov students had designed a “smart” bicycle helmet called the Cranium Cradle as part of CIJE’s northeast regional Innovation Day held in New York in May 2018. The team was chosen there as one of the top six teams to compete in the finals, presenting their invention to a team of investors at an event hosted by Malion Holdings in New York in January.

For the last two years, Bais Yaakov has offered an engineering elective course based on CIJE high school curriculum. The school also has a robotics club. This is the first year they have participated in Innovation Day.

Bais Yaakov was the only team from outside New York to compete in the finals.

“CIJE Tank” is based on the TV show “Shark Tank,” Saltzman said. “Judges look at the projects from a business perspective and which projects had the best potential to actually be made into a product and sold on a real market.”

Although the Bais Yaakov team wasn’t the top winner, Saltzman said all of the finalists’ projects receive attention from entrepreneurs who may be interested in taking their products further.

Bais Yaakov teacher, Sarena Schwartz, said the program has had a positive impact on her students.

“What has been amazing to me is that the girls have exceeded all expectations through their own creativity and initiative.  It’s been transformative,” she said. “They are far more confident and aware of their capabilities than they were just a few short months ago.” 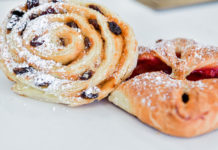