For some people, nothing says Passover quite like fork-tender brisket or a savory matzah ball soup. Jeffrey Spitz Cohan, executive director of Jewish Veg, agrees, except he says it can all be vegan. While many may be hesitant to give up their traditional meat-centric Pesach meal, Cohan says that eating vegan on Passover is easy. Veganism, he argues, is actually encouraged in the Torah.

For some, keeping Passover while vegan is difficult due to the restriction on the types of grains known as chametz, and legumes falling under the Ashkenazic prohibition of kitniyot. Alex Birman, of Pikesville, who became vegan after reading “Diet for a Small Planet” by Frances Moore Lappé, said that Passover is challenging because many of his go-to grains, such as kasha (buckwheat), are not kosher for Passover. The declaration in recent years that quinoa is kosher for Passover, however, was a game changer.

“The grain I switched to is quinoa,” Birman said. “We do a lot of quinoa salads, quinoa with onions, quinoa with other vegetables, sort of like stir frys.”

(Quinoa, a Peruvian staple that gained popularity in the first decade of the new millennium, is actually not a grain, but is grown as a grain substitute.)

Charles Stahler, co-director of the Baltimore-based Vegetarian Resource Group, agreed that Passover is one of the hardest holidays for him. He eats a lot of potato dishes and nut kishka. He also makes matzah meal pancakes by using mashed bananas as a binder instead of eggs.

But not all vegans find Passover a challenge. Diane and Sid Bravmann, of Pikesville, became vegan for their health. For Diane, Passover is not difficult at all. She finds it easy to make any recipe vegan by making substitutions such as mashed bananas or flax seed for eggs, and she makes a mock chicken soup.

While the Haggadah delineates what to eat, drink and do for most of the Seder, the Torah also councils veganism, according to Cohan and Rabbi David Rosen, international director of interreligious affairs at the American Jewish Committee.

In presenting evidence that God intended mankind, as well as other animals, to eat a vegan diet, Cohan cites a passage in Genesis, where God says to man: “Behold, I have given you every plant yielding seed that is on the surface of all the earth, and every tree which has fruit yielding seed; it shall be food for you; and to every beast of the earth and every bird of the sky and to everything that moves on the earth which has life, I have given every green plant for food.”

Rosen explained that the right to eat meat was given only after the Flood and even then, it was concessionary. God does not want humans to eat meat, Rosen said, but grants permission as a compromise, perhaps with the idea that in the future, humans will once again be eating a vegan diet.

Cohan referenced the concept of “tzaar baalei chayim,” the halachic directive to prevent animal suffering. It is “a core concept of Judaism,” he said, and appears in a number of verses in the Torah

Meanwhile, Rosen pointed to many instances of injustice and unnecessary animal suffering in modern-day animal agriculture to make the argument that no meat today is truly kosher. He cited examples of confining animals in such tight spaces that they begin fighting, leading to farmers clipping their beaks or sanding off their horns without anesthetic. Other examples he referenced were the killing of male chicks in gruesome ways as they are not “useful” to the industry, force feeding and caging calves for veal, and separating calves from their mothers when they are still very young.

He also called attention to the Torah command to be protectors of the earth and the human body.

“The livestock industry today involves more pollution than all the forms of transport put together. It’s the major factor in the degradation of our environment, destruction of rainforests, all inextricably linked to global warming and threatening our very existence,” he said. “There’s a very clear correlation between meat eating and cancer of various kinds, as well as heart disease.”

Yet another reason, Rosen offered, was “baal tashchit,” the Jewish legal concept of preventing waste. Considering the limited amount of water and arable land to support the world’s population, using more than a quarter of that land — according to the UN Food and Agriculture Organization — and approximately 20-30 percent of all potable water globally for animal agriculture that feeds only a small portion of the population regularly is wasteful.

Eating vegan food on Pesach is not just for vegans, according to Debra Wasserman, of Baltimore, co-director of The Vegetarian Resource Group and author of several cookbooks on Jewish vegetarian and vegan foods. When she started writing the “Low-Cholesterol Passover Recipes” cookbook, which contains all vegan recipes, she thought the audience would extend far beyond Jewish vegans.

“My experience was that almost every single Jewish household had someone on a restricted diet due to health issues, and if you thought about Passover in general, most of the dishes being prepared had a million eggs in it or were high fat or meat-centered,” Wasserman said. “Certainly someone who’s got heart problems or diabetes or whatever, to do that for eight days is deadly.”

Her book sold more than 20,000 copies and, when it was first published, was stocked by many Jewish bookstores, according to Wasserman. “We were actually surprised at how popular it became and [that] they would keep reordering.”

Wasserman’s idea that many people, even those who aren’t vegan, would be interested in vegan recipes for health and for variety, can be seen at Congregation Beit Tikvah on Roland Avenue, where a Vegan Cooking Demonstration is set for March 23.

Led by Marcy Schveibinz, of Ellicott City, a member of the Vegetarian Resource Group, the demonstration, though focused on making vegan hamantaschen, will include recommendations by Schveibinz for making Passover meals vegan. Schveibinz believes that veganism is tied in with the idea of “tikkun olam,” repairing the world, and that through a vegan diet, people can begin to improve and benefit the planet.

For Schveibinz, Passover also isn’t all that difficult.

“My diet doesn’t change a whole lot on Passover, because my diet revolves around vegetables,” she noted. She can make brisket using jackfruit or seitan as a meat alternative and uses flax seed as an egg replacement to make matzah balls.

The impetus for the demonstration, said Miriam Winder Kelly, of Baltimore, one of the organizers, is young people.

“We have found that a lot of the young people are turning to vegetarianism,” she said. “In response to the eating habits of young people, we want to offer diverse experiences.”

In addition, Kelly said, the demonstration is open to the entire community.

“We want to welcome everyone who’s interested in all things Jewish, whether you’re a carnivore or a vegan,” Kelly said. “We try to be welcoming to everyone.”

Instructions
Heat the oil in a skillet over medium-high heat. Add the onion, celery, carrots and garlic and let them sweat for about 3-4 minutes. You don’t want them to brown or change color. The veggies should just get softer. Add the chickpeas to the skillet and toss with the veggies. Mix in the seasonings. Remove from the heat and let cool.
Transfer the chickpeas and veggie mixture to a food processor. Add the lemon zest and juice of half the lemon. Pulse the mixture and then process until smooth. Taste for any seasoning adjustments. Using a measuring cup, scoop 1/3 cup of the mixture
and mold it into a gefilte fish shape. The shape is like a small football or a lemon. Lay the molded gefilte “fish” on a small baking sheet or plate. Repeat with the rest of the mixture. Cover the gefilte “fish” with plastic wrap, letting the wrap fit around each piece. Refrigerate for at least an hour or until ready to serve.
Serve each piece of Gefilte “fish” on a small bed of red cabbage and garnished with a small slice or a few shreds of carrot. Squeeze the remaining half lemon over the “fish” and cabbage. Serve with horseradish, if desired.

Instructions
Pre-heat the oven to 400F. Place the pecan nuts on an oven tray and roast for about 10 minutes or until golden.
Combine the sliced cabbage, fennel, beetroot and cranberries together. Mix in the avocado.
Combine all the dressing ingredients and pour over the salad. (Dressing can be made in advance.)
Place the salad in a large serving bowl and sprinkle pecans on top.

Instructions
Preheat oven to 375F.
In a large casserole dish, mix together all the ingredients. Bake uncovered for 45-50 minutes. 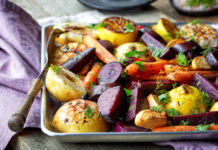 A melange of roasted vegetables