Nearly every Jewish holiday puts food and wine at the center of the celebration. There is a common phrase that describes Jewish holidays thus: “They tried to kill us, we survived, let’s eat.” A good meal, however, is certainly incomplete without a fine wine to go along with it.

“At every Jewish celebration, wine gets its role,” Vadia said. “We use wine to make blessings and when we want to have a big party, so it’s fitting that we have wine when we celebrate a big event like going out of Egypt.”

Similarly, Shoenfeld said, “Passover is definitely the most wine-centric holiday we have, and for the Israeli wine industry, it’s a huge sales peak.”

As the head winemaker at Golan Heights Winery, Shoenfeld was recruited from California and has worked at the winery for 27 years, since back when there were no Israeli winemakers with degrees.

He said it “makes sense” to think about wine pairings for Passover, including for the Seder. “At the Seder,” he explained, “we are taking this painful history of slavery and suffering and looking at the flip side of redemption and freedom, and there’s a lot of symbolism in the foods we eat. But wine is also symbolic. Wine can help in magnifying and elevating that symbolism. It also makes it more fun.

“A lot of people think of wine as part of the Passover Seder and don’t think about the food and the pairing, but wine and food to me are kind of the same thing,” he continued. “I think of wine as another dish, eating it between other courses.”

Like the process of the Seder itself, Shoenfeld suggested drinking wine with attention in a specific order: “Drinking a sacramental wine at the beginning of the Seder is a tough way to start the evening. Instead, we have an order in which we like to drink wine. We can best appreciate wine progressively from lighter and drier to heavier and sweeter. That order also makes sense during the Seder.”

Of course, at the Passover Seder, Jews are commanded to drink four glasses of wine symbolizing the four stages of redemption that the Israelites underwent during Exodus, but the holiday’s connection to wine goes even further. “Passover gives respect to where you come from, and wine gives respect to the land that it comes from. Both give respect to the past and ties to the roots of tradition or soil,” Vadia said.

“In Judaism, one of the things you’re required to do is ask for forgiveness from ha-makom—‘the place,’ meaning God — and that’s the destiny,” he explained. “We are also talking about that emphasis on locality with our wines; it’s all about the place.”

Vadia grew up in a secular, partly-Ashkenazi and partly-Mizrachi family in the center of Israel. He has been in the wine industry for almost 12 years, working in the United States, Argentina and New Zealand after studying horticulture and winemaking in California. For him and his family, Passover always entails participating in a Seder, reading parts of the Haggadah, speaking about what freedom means and contemplating their personal journey to freedom.

And, of course, it incorporates wine carefully paired with each Passover food.

With chicken, Vadia suggests a Grenache or a floral white wine suited to spring, such as Avivim, which is made from Chardonnay grapes and aged in oak for five months.

With lamb, Vadia suggests Galil’s Yaron or Ela from 2014, both winning wines in the Mundus Vini 2018 competition. Shoenfeld suggests a full-bodied red.

Gefilte fish can pair well with their 2017 Sauvignon Blanc, which, due to its refreshing acidity, would complement the texture of the dish. Shoenfeld also suggests a sparkling wine, especially to offset the bitter heat of the horseradish.

With beef brisket, Vadia suggests their 2014 Meron, another award-winning wine in 2018. Shoenfeld suggests a wine like the Yarden Syrah, which has “earthy, smoky and even gamy notes.”

Coconut macaroons, a Passover dessert favorite, can be paired with sweet wines such as the Golan Height Winery’s “Yarden Heights” Gewurztraminer or their Muscat Canelli Moscato. Shoenfeld also suggests Moscato, or if you are feeling a little more adventurous, go with the sweet Yarden Port, which also pairs well with a flourless chocolate cake.

No matter what type of wine is paired with Passover cuisine, Shoenfeld had one principal request: “Israel is one of the areas that has the oldest wine-making traditions on the planet, so it’s appropriate to celebrate historic events with Israeli wines, no matter where you are in the world.”

As he concluded: “With the historic event of leaving Egypt for Israel, it doesn’t make sense to drink wine from anywhere else. Only Israeli wines.” 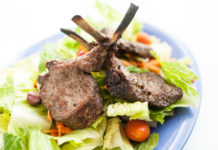