This is one of the shorter sections of the Torah, and it is made up almost entirely of a breathtaking and chastening poem. The term “awesome” tends to be overused today, but this poem is truly awesome.  Unfortunately, the power of the Hebrew rhythm and poetic style is lost in the English translation, but we can still sense some of the majesty.

“Give ear, O heavens, let me speak; Let the earth hear the words I utter!” Thus Moses commences to “sing out” the majesty of God (the word for poem in Hebrew, shir, is also the word for song).

One key Torah verse brilliantly sums it up: “You shall not profane My holy name, that  I may be sanctified  in the midst of the  Israelite people —  I the Eternal who sanctify you.”

Why was Moses, the quintessentially loyal servant of God, punished by being forced to die outside the Land of  Israel but in full view of its beauty? This is one of the most puzzling questions of the Torah. It seems that virtually every Bible commentator tries to explain the problem, but the explanations do not satisfy.

One key Torah verse brilliantly sums it up: “You shall not profane My holy name, that I may be sanctified in the midst of the Israelite people — I the Eternal who sanctify you” (Leviticus 22:32-33). That is to say, do not engage in chilul Hashem. Be just and compassionate and fair. Such behavior is a public declaration of God’s sanctity and more. By sanctifying God’s name through our modest good conduct, we  step into a dynamic relationship through which God also sanctifies us. 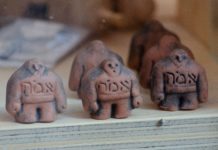