It’s truly miraculous that Lulo Reinhardt is here to tell his family’s story and carry on its musical traditions. The Reinhardts — gypsies from India who settled in Germany 600 years ago — survived Buchenwald, Auschwitz and death marches. Some were inside, and moments from entering, the gas chambers when Auschwitz was liberated.

Reinhardt, the great-nephew of gypsy jazz guitar legend Django Reinhardt, plays Saturday at the Gordon Center for Performing Arts at the Owings Mills JCC as part of International Guitar Night. 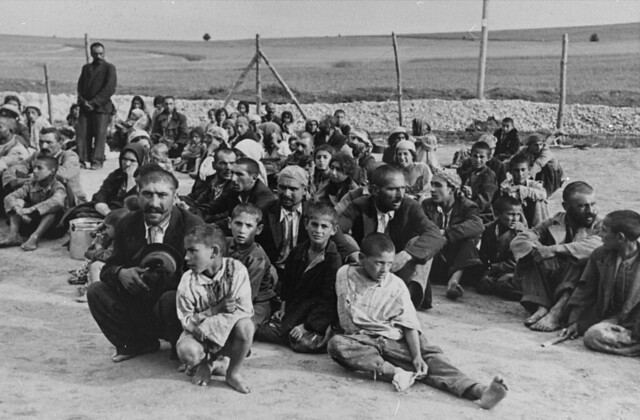 He lost hundreds of cousins he never met to the Holocaust, in which up to 220,000 gypsies were killed, according to the United States Holocaust Memorial Museum. But his grandparents and his father as well as his father’s siblings, with the exception of one brother, survived.

“I love his style. I’m definitely a fan,” SONiA Rutstein of Disappear Fear said of Reinhardt. The Grammy Award-winning Baltimore native singer-songwriter brought him to Baltimore to play on an album she produced by young violinist Sam Weiser in 2010. She heard some gypsy sounds in Weiser’s playing and thought Reinhardt could complement the music. She also performed with him at Musikmesse, a music merchandising convention in Germany, and will be performing at his club in Koblenz, Germany this April.

“[His style is] a combination of, of course, the Django, the jazz, with also a touch of the flamenco style. He’s lightning fast with the movement, but it’s very tasteful, and he’s not a speed demon,” she said. “He’s hysterical actually. He’s very determined, he’s a perfectionist and a little crazy, as most extraordinary musicians are.”

Born in 1961, Reinhardt learned the music of his family from a young age, and he also learned its Holocaust stories, which echo the struggles and journeys of Jews during that time period.

Toward the end of the 1930s, Dr. Josef Mengele came to the “gypsy ghetto” where about 50 families lived, bearing gifts in an effort to attract participants to submit to blood tests and other physical measurements and conduct interviews about where they came from since gypsies were not native to Germany. Reinhardt said that although the gypsies had problems in Germany much like the Jews, they trusted Mengele. But a few years later in 1942, when Reinhardt’s father, Bawo, was just 18 months old, the gypsies were moved from the ghetto to the city of Koblenz in western Germany, which was used as a collection point. From there, the gypsies were put on trains destined for Buchenwald.

At the time, Reinhardt’s grandfather, Joseph, who was a violinist, actually worked for the German army in a secretarial position.

“Many gypsies were fighting for the German army, also many Jewish [people],” Reinhardt said. “At this time it was a good job. It was a good paying job, even if you [did] an office job.”

Arriving home after work one day, Reinhardt’s grandfather was surprised by what he found.

“He came home from his work and the ghetto was empty. No one was there anymore. He was shocked. It was like a ghost street,” Reinhardt said. “He went to back to work and he was asking his colleagues and said, ‘Where’s my family?’”

His co-workers couldn’t answer and suggested he ask the police, who at that point were SS officers. He eventually found out that the gypsies were deported to the concentration camp.

As the story goes, Joseph rode his horse to a city near Buchenwald, but the horse died along the way. It took him two weeks to reach the camp.

“You imagine he had this German uniform and he was knocking on the door at Buchenwald. The German soldier there said, ‘What do you want here?’ and so my grandfather said, ‘Let me in, my family is here,’ and the soldier said, ‘You better go,’” Reinhardt said. “My grandfather took off his uniform and said, ‘Let me in, I’m a gypsy and my family is here.’ … They gave him a tattoo.”

But the gypsies had been sent off by then. Some family members went to Ravensbruck, the camp for women and young children, and others to Bergen-Belsen and Mauthausen-Gusen before they all wound up at Auschwitz.

Reinhardt said his father was in line for the gas chamber at Auschwitz when Soviet troops arrived in January 1945. One of his brothers was inside, and survived, although there may have been some brain damage. After being liberated, the family went back to Koblenz, where Lulo was born in 1961.

His legendary great-uncle, Django, narrowly avoided concentration camps. During the war, Django was popular enough that he actually entertained the Nazis in Paris in underground clubs.

“There were many jazz aficionados among the Nazi occupiers, so they put together jazz clubs and jazz concerts,” said Bret Werb, music and sound collection curator at the United States Holocaust Memorial Museum. “Django was pretty well protected. Eventually, he left Paris and survived in the countryside.”

The family story is that Django encountered some Nazi troops when he was leaving Paris and was arrested. While some officers wanted to send him to a concentration camp, one soldier who was a fan convinced the others to let Django go.

Lulo Reinhardt visited all the camps where his family was held prisoner and the barracks where gypsies were held. He and his fellow International Guitar Night performers played in the library at Auschwitz last year. On one of his albums, Reinhardt recorded a suite of songs called “Memories of Dachau,” dedicated to his uncle, also named Lulo, who was held at the camp.

Music wasn’t completely absent from the Reinhardt family, or the gypsy people, during World War II, similar to the experience of Jewish musicians during the Holocaust.

“My father’s oldest brother, he was 12 or 13. He was playing every single day,” Reinhardt said. “Even sometimes the Nazis said, ‘Come out and play,’” and he would play, sometimes barefoot and scantily clad in subzero temperatures.

“I asked my uncle, ‘How can you play in this cold weather?’ And he said, ‘You just play,’” Reinhardt said. “He was so scared.”

Werb said each concentration camp had its own culture, and so it’s hard to generalize how music worked in the camps. In the ghettos, some people brought instruments, but sometimes they’d get lost along the way, burned for fuel or traded for food. In the concentration camps, the instruments could have arrived with people or could have been confiscated from other prisoners.

“There’s definite documentation that there were gypsy ensembles, and there were groups called gypsy orchestras that may have included gypsies and non-gypsies,” Werb said.

Rutstein, a Pikesville High School graduate and member of Congregation Beit Tikvah, said the Reinhardt family’s experiences speak volumes about their character and their music.

“The Reinhardt family, I think, is a strong breed. That they survived really says a lot in mind and body and spirit,” she said. “I think that’s indicative of gypsy music as well … it’s going to seek the strongest path going forward.”

Having toured the world, including Israel six times, Rutstein can speak to the universality of gypsy music and noted that the music has found popularity in Baltimore, with last weekend’s sold-out Charm City Django Jazz Fest at the Creative Alliance.

“It sort of takes you back several decades, but [the music is] still quite vibrant now. It’s fun. It can really be a nice palette for excellent playing; you really can showcase your playing to a magnificent extent because, kind of like bluegrass does, you take a lead and you just go with it,” she said. “It’s sort of like European bluegrass in a way, somewhere in between klezmer and polka. It’s very in the moment, and yet the melodies are powerful and indelible.”

Through survival, the family’s rich musical traditions live on.

“I started with Django’s music when I was 5,” Reinhardt said. “My father was teaching me guitar for the first two years, from age 5 until 7. He showed me all the main, basic chords and everything on guitar.”

His father, Bawo, introduced him to French music, Brazilian guitar and Frank Sinatra’s music as well — his father’s eclectic musical tastes rubbed off on him.

At age 7, Reinhardt started playing with his cousin and next-door neighbor, Mike Reinhardt, who taught him the rhythm guitar parts of Django’s music. They’d play five, sometimes 10 hours a day. At age 12, he joined Mike’s band.

“After Django died [in 1953], there was nothing between ’53 and ’63 because no one wanted to play guitar anymore because they had so much respect for Django,” Reinhardt said.

He played in Mike’s band, which became quite popular because of this lull in gypsy music, for 25 years.

In 1992, Reinhardt and his father started a band called I Gitanos that played Latin music with lyrics sung in the Romani gypsy language. In his downtime, he started the Lulo Reinhardt Project, which evolved into the Lulo Reinhardt Latin Swing Project in 2008. His namesake projects feature his diverse musical interests, from samba to flamenco to rumba to jazz to Latin swing.

When Reinhardt’s father died in 2013, he wrote a song called “The Fighter,” which he performed at the funeral. Weeks later, he and the Latin Swing Project recorded an album, “Bawo,” dedicated to his father. The band recorded the entire album in two days. “Best CD I ever made,” Reinhardt said.

While the horrors Bawo and the Reinhardt family endured during the Holocaust are behind them, anti-gypsy sentiment still lives on.

“We are confronted with this every single day, the gypsies,” he said. “They kill gypsies still, neo-Nazis.”

Despite a complicated history and present-day anti-gypsy sentiment, Reinhardt remains a proud ambassador of his heritage. Next year, he plans to undergo his third film project, in which he will retrace the journey his ancestors took from India to Germany and connect and play with gypsy musicians along the way. He also plans to tell the story of his musical journey and that of his family in a book he’s writing called “The Way to Latin Swing.”

As for Saturday’s show at the Gordon Center, Reinhardt said it’s the best tour he’s ever done.

Gore, the tour’s founder, said Reinhardt is deeply committed to his craft.

“Lulo believes that developing his own style is the best way to honor Django, rather than repeating his playing note for note, over and over again,” he said. “Django was an innovator after all; and so it should be for Lulo, who has been living and breathing Django since he was a toddler.”

Randi Benesch, managing director of the Gordon Center, said when she came to the Gordon Center three-and-a-half years ago, she didn’t know what to expect from International Guitar Night, which is an annual staple at the venue.

“I was really overwhelmed and amazed by the talent and diversity of the guitarists that Brian [Gore] puts together each year. The Gordon is such an intimate space and the acoustics are so incredible that it’s the perfect program for the Gordon,” she said. “These are always true guitar masters, and they really represent the great versatility that the guitar can provide. It always amazes and wows me how each player has their own unique style and technique.”

International Guitar Night plays the Gordon Center on Saturday, March 5 at 8 p.m. Tickets are $28 in advance and $35 at the door. Visit jcc.org/event/international-guitar-night for more information.