Kara Brook, proprietor of Waxing Kara and the Honey House in the Metro Centre at Owings Mills, usually sees a pretty good bump in honey sales around Rosh Hashanah, as people stock up for the sweet celebration that is the Jewish New Year.

But this year that bump was a boom, thanks to New York Times food critic Florence Fabricant, who profiled Kara’s homegrown honey in her Aug. 22 piece “To Sweeten: A Variety of Honeys For Rosh Hashanah.”

“She wrote about us yesterday,” Brook said last week with a wide-eyed smile and a laugh. “And if you want to talk about a spike in traffic! It was very good timing.”

The honey, she pointed out, has not only been lauded by a famous foodie, but was also certified kosher last summer by Star-K.

“We are fielding many, many calls and emails right now from people making absolutely sure that the honey’s kosher,” she said. “It’s important to this community.”

Enter Brook’s shop and you’ll find yourself surrounded by floor-to-ceiling shelves stacked with a variety of honeys, some from her 102-acre Chesterhaven Beach Farm on Kent Island and some from other producers. She also sells a number of honey-related products, most made in-house using her honey and wax, including lollipops, teas, candles, body products and Brooks’s own artwork — encaustic paintings that use beeswax pigments.

The Rosh Hashanah practice of dipping apples in honey, predicting a sweet year to come, is a tradition dating back not to the Talmud or Torah, but may be traced from about the 7th century, according to Reform Judaism magazine.

“Neither the Bible nor the Talmud dictates the minhag, or custom, of dipping apples in honey,” Tina Wasserman writes. “Traditionally, as early as the 7th century, it was customary to wish someone, ‘Shana Tova Umetukah’ (A Good and Sweet Year), and honey — whether from dates, figs or apiaries — being the most prevalent sweetener in the Jewish world, was the most available ‘sweet’ for dipping purposes.”

But not all honey is created equal, and Brook was happy to illustrate how apple-dippers can expand their honey horizons past supermarket plastic honey bears with a little taste test of honey varietals. Like varietal wines, sourced from specific kinds of grapes, honey differs depending on the types of flowers and flowering plants the bees are pollinating.

First up is Butter Bean honey, sourced from hives whose bees visit pumpkin patches and butter bean fields in Delaware. The first note is light, a bit green and grassy with earthy and even buttery notes.

Blueberry honey, very different flavor-wise from the Butter Bean, is from highbush blueberries in New Jersey. It has a sharper, fruitier flavor with blueberry and even licorice hints.

“I’ll give you a little Holly,” Brook says. “This is new for us. This time of the year the holly on the Eastern Shore just explodes and the hives start to fill back up with honey, because it’s one of the only food sources for bees this time of the year.”

The Holly honey has a soft and less fruity flavor, with mild molasses, or warm caramel undertones.

Next up, Brook’s own Spring honey. “It’s a wildflower honey,” Brook said, offering a dollop.

The Spring honey is a lighter gold color with a more complex flavor profile, fruity and floral with an earthy finish, which she says is due to the mix of flower and flowering tree varieties that the bees pollinate on the farm.

“We took 40 acres and we’ve experimented a number of different ways over the last eight years growing different indigenous nectar-rich plant material,” she said. “It’s a wildflower mix. What I make is called artisanal honey. So, it’s not varietal honey.”

The Avocado honey has a much deeper, caramel color than the other light-gold honeys and a dark, warm, rich flavor, very reminiscent of molasses.

Finally, the Sweet Clover honey from the Dakotas has a crisper, brighter and stronger, but more familiar, clover-honey flavor.

During the High Holidays, Brook’s go-to Rosh Hashanah dipping apple is, not surprisingly, the Honey Crisp, which she pairs with her own Spring honey.

But beyond the taste of honey, she says the sweet Rosh Hashanah tradition, thankfully, keeps her sales “good enough to want to stick around.” 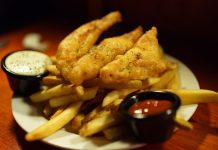