Email scandals, accusations of anti-Semitism, a resigning chairwoman, anti-immigration rhetoric, plagiarism in speeches — the 2016 presidential election has been like no other in recent memory.

With a public that is probing both GOP nominee Donald Trump and Democratic nominee Hillary Clinton on their experience, character, families and a bevy of other issues, voters young and old are questioning their support of their parties’ nominees and the potential direction of the country under their leadership.

“Honestly, I’m not a fan of either candidate,” said David Kashan, a 24-year-old Owings Mills native in his third year of medical school at A.T. Still University of Health Sciences in Kirksville, Mo. “It’s unfortunate, because I feel as though I’m forced to pick between the lesser of two evils in this election, as opposed to choosing the candidate I think best represents my beliefs and values.”

The head-to-head battle between Trump, 70, and Clinton, 68, pits two of the most polarizing candidates in modern U.S. presidential history against one another. At the conventions, the nominees continued to show they greatly differ in their temperament and public styles, and voters feel that each has their share of shortcomings. 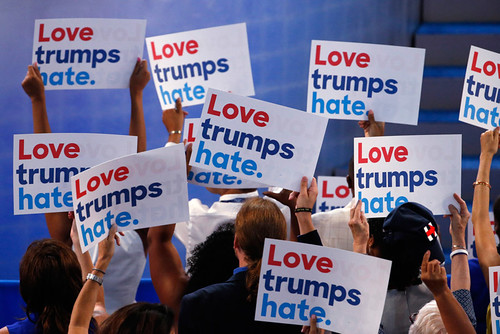 Trump, for example, stuck to his hard-charging, aggressive rhetoric during his 75-minute acceptance speech on July 21, attacking Clinton’s record as U.S. secretary of state and remaining tough on his stance opposing illegal immigration. While that same approach helped him ascend to the standard-bearer of the Republican Party in the last year, some political experts believe it could hurt him in the general election.

“I think the rhetoric has been downright disgusting,” said Donald F. Norris, director of University of Maryland, Baltimore County’s School of Public Policy. “I’ve never experienced anything like it in all the years I’ve been observing politics, and that’s been a lot of years. Calling for the opposition party to be jailed, hung or shot is just unconscionable, period.”

Marcia Wagner, a 67-year-old Pikesville resident, pointed out flaws in both candidates, ranging from Trump’s brash personality to Clinton’s use of a private email server while serving as one of the country’s top diplomats. But Wagner said the experience Clinton, a former first lady and U.S. senator from New York, gained serving in various public roles over the years gives her a distinct advantage over Trump.

“Hillary is not perfect, but nobody is perfect,” Wagner said. “There are things I don’t like about her, but I think she is a competent government employee who has served the nation for many, many years. Anyone who serves the country makes mistakes.”

“I just can’t believe [Trump] is the nominee. I just don’t think he’s qualified to be president,” Wagner added. “I’ve said that to people who support him, and they say to me, ‘I don’t think Hillary is qualified.’ … I think much of what Trump has done is reprehensible.”

In the days leading up to the DNC, however, WikiLeaks released a series of emails that seemed to show Democratic officials trying to tip the scales in favor of Clinton over Vermont Sen. Bernie Sanders, an independent who sought the party’s nomination. As a result of the fallout from the leak, DNC Chair Debbie Wasserman Schultz announced her resignation on July 24, effective after the conclusion of the convention.

Baltimore Mayor Stephanie Rawlings-Blake was brought in to gavel at the DNC on Monday, taking over for Wasserman Schultz amid the scandal. Rawlings-Blake has served as the secretary of the DNC since January 2013.

Kevin Loeb, policy director in the office of Baltimore County Executive Kevin Kamenetz, doesn’t think the latest revelations will be enough to divide the Democrats’ support of Clinton. If anything, he expects the party to further rally behind her.

“Obviously, the DNC should be impartial during the primary season, and if they did not, then that was a mistake,” Loeb said. “But inside party politics does nothing to diminish the positive energy here in Philadelphia. It is clear that Democrats are united and ready to elect Hillary Clinton as president of the United States.”

Kamenetz, who was in attendance at the Philadelphia convention, could be seen Monday at a National Jewish Democratic Council event honoring Jewish women in Congress. Wasserman Schultz, who was supposed to headline the event, was not there.

Still, questions about Clinton’s integrity, honesty and trustworthiness continue to cast a cloud for voters. Paul Volosov, a 67-year-old resident of Fallstaff, wonders if Clinton has enough time to overcome such perceptions about her character.

“Hillary has a huge credibility gap,” Volosov said. “What can we believe about her? Can we trust her? Obviously, so many people are afraid she can’t be trusted.”

The Republicans, on the other hand, still appear somewhat split on fully embracing Trump as their nominee.

Prominent Republicans, such as Maryland Gov. Larry Hogan, have distanced themselves from Trump at every turn. Throughout the election cycle, in fact, Hogan has reiterated his refusal to endorse or vote for Trump, joining former presidential nominees Mitt Romney and Arizona Sen. John McCain, among others, in boycotting the RNC.

“What one would expect to happen is that the Democrats will have a very good turnout and the Republicans will not have a good turnout, because so many Republican leaders are staying home,” Norris said. “Trump has been able to get very high turnouts wherever he has gone in the primaries. But they … were the Tea Party folks, the angry white males, evangelicals, and they can’t win a national presidential election for anybody because their numbers are too small.”

For many in the Jewish community, policy on Israel is at the center of the race. With a strained relationship between President Barack Obama and Israeli Prime Minister Benjamin Netanyahu, Clinton and Trump supporters are looking for someone to form a stronger pact.

Howard Libit, executive director of the Baltimore Jewish Council, has noticed a committed approach from both parties so far to fortify their pro-Israel platforms in an effort to appeal to Jewish voters.

“For both the Democratic and Republican parties, we’ve seen strong statements of support for Israel, which is gratifying to see,” Libit said. “It’s important to see that the elected officials out of both parties understand the importance of the American and Israeli partnership and our support in continuing it.”

In his acceptance speech, Trump briefly mentioned his plan to work with Israel to defeat the so-called Islamic State, which is also known by the acronym ISIS. He promised to restore the safety citizens feel they have lost and specifically noted Clinton has left behind a legacy of “death, destruction, terrorism and weakness.”

“We must work with all of our allies who share our goal of destroying ISIS and stamping out Islamic terrorism and doing it now, doing it quickly,” Trump said. “We’re going to win. We’re going to win fast. This includes working with our greatest ally in the region, the State of Israel.”

Clinton has been more reserved in her approach when it comes to the issues and threats facing Israel. She came under fire earlier this year from AIPAC and Netanyahu for her support of the Iran nuclear deal, negotiated by the U.S. and five other world powers.

Shlomo Roshgadol, a 56-year-old Pikesville resident, thinks Trump will make good on his law-and-order approach to fight terrorism and crime and strengthen national security as a whole.

“[Trump] has made security one of his big initiatives here in the U.S., so I’m confident he’s going to be worried about the safety of Israel as well,” Roshgadol said. “I think he’s going to be tough on the terrorists, which is something I think is one of the biggest problems we have now in both the U.S. and Israel.”

Others are having a difficult time taking wrapping their head around the idea of taking Trump as a legitimate leader. Jodi Saunders, a 45-year-old Columbia resident, said Trump has focused too much of his attention on denouncing Clinton on public forums rather than offering solutions to his proposed policies.

“In the case of Donald Trump, he’s just an extraordinarily obnoxious human being,” Saunders said. “The way he has treated his opponents is not how a president acts, the way a normal human being acts. I’m not saying a presidential candidate needs to be a weak person, but on the contrary, strong people do not viciously attack their opponents. They attack the issues rather than the people, and that’s where I think Hillary has taken advantage so far.”

Trump and Clinton will square off in their first debate on Sept. 26 at Hofstra University in New York, and at that point, the picture could start to become clearer for voters.

“I honestly have no idea how this is going to play out,” Norris said. “With the way this election has gone so far, you don’t really know what’s going to happen. I wouldn’t be surprised by anything that happens at this point.”