Perhaps the most striking and disturbing statistic the Anti-Defamation League gleaned from its recent national survey of about 1,000 internet users is that close to 40 percent of Americans have experienced “severe online harassment.”

Most commonly reported was online harassment based on sexual orientation, with 63 percent of LGBTQ+ people having experienced harassment.

In addition to Muslims and Jews, the survey found 30 percent of Hispanics, 27 percent of African Americans, 24 percent of women and 20 percent of Asians experienced online harassment. At the bottom of the scale were men at 14 percent, Christians at 11 percent and whites at 9 percent.

In her 2014 book “Hate Crimes in Cyberspace,” Danielle Keats Citron, law professor at the University of Maryland Carey School of Law and affiliate scholar with the Center for Internet and Society at Stanford Law School, wrote about the impacts of cyber harassment and cyber stalking.

Citron cites Elizabeth Cargill, a psychologist who works with cyber stalking victims, about how online harassment feels: “like the perpetrator is everywhere: Facebook, email, message boards and outside the office.”

Citron notes that the incidents of people experiencing cyber stalking rises, perhaps not surprisingly, in correlation with the amount of time people are online, especially young people who spend a lot of time online.

The ADL survey found that 65 percent of 18-29 year olds had experienced online hate or harassment, with 49 percent reporting severe harassment.

By far, of the leading online or social media platforms on which people said some of their online harassment occurred, Facebook was the leader, with 56 percent of respondents reporting harassment on Facebook. Lesser percentages of harassment were reported on Twitter (19 percent), with YouTube and Instagram at 17 percent and 16 percent respectively. At the bottom of the list were Snapchat (10 percent), Twitch (8 percent) and Discord (7 percent).

Meanwhile, some of those numbers were reversed for frequent, daily users of these platforms, with daily users of Twitch, Reddit and Facebook topping the list at 47 percent, 38 percent and 37 percent of respondents, respectively, reporting harassment.

That impact of harassment is reflected in the actions people took following online harassment, with 38 percent of respondents stopping or changing their online activity. Eighteen percent contacted the platform where they were harassed, while 15 percent “took steps to reduce risk to physical safety,” and 6 percent contacted police.

The ADL survey found that most people, regardless of party affiliation, support more action in response to cyberhate, including strengthening laws against perpetrators and online platforms and giving police more training.

“Americans also want to see private technology companies take action to counter or mitigate online hate and harassment. They want platforms to make it easier for users to filter and report hateful and harassing content. In addition, Americans want companies to label comments and posts that appear to come from automated ‘bots’ rather than people,” the report said. “Finally, a large percentage of respondents were in favor of platforms removing problematic users as well as having outside experts independently assess the amount of hate on a platform.”

The report found support is strong for these types of action to be taken to mitigate online harassment, “across the political ideological spectrum. Although liberals especially support platform recommendations, with a majority of conservatives also supporting all recommendations.” 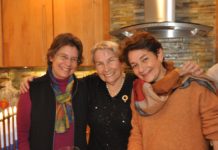 Local teen is on his way to the World Maccabiah Games