Jonathan Allen and Avi Schneider normally plan their own lobbying trips to Capitol Hill in Washington, D.C. But on Tuesday night, the pair of University of Maryland, College Park, sophomores decided to shake things up and head to Annapolis.

Allen, 19, and Schneider, 20, the president of and vice president, respectively, of Terps for Israel, joined about 200 people from the Baltimore and Washington, D.C., Jewish communities for Advocacy Day, which was hosted by the Baltimore Jewish Council and Jewish Community Relations Council of Greater Washington (JCRC).

“While we have met with members of Congress and Senators, we had really never done anything like this before, so we said, ‘Let’s give it a try and see what happens,’” Schneider said. “It turned out to be a no-brainer.”

It was the first time they had joined another organization’s pre-planned lobbying trip.

“While I have had access on Capitol Hill and met with members of Congress before, I saw a lot more state delegates and senators walking around very casually,” said Allen, an American Israel Public Affairs Committee (AIPAC) campus activist. “It was very easy to speak with them just about any issues or topics that are relevant in what’s going around the state.”

The group spent the evening meeting with leaders of the General Assembly from Baltimore City, Baltimore, Howard and Montgomery counties to discuss a host of subjects important to the Jewish communities of Baltimore and Washington.

These included the state’s efforts to divest itself from companies that support the boycott, divestment and sanctions (BDS) movement against Israel, whether Maryland companies should offer earned sick and safe leave to their workers and budget items the community would like to see funded.

Del. Benjamin Kramer, a Democrat who represents District 19 in Montgomery County, said he was pleased to see so many active residents taking an interest in an anti-BDS bill he is the sponsoring.

The bill would prevent the Maryland State Retirement and Pension System from investing in any companies that participate in the BDS movement and also prohibits companies that support BDS from securing state procurement contracts.

“There is a lot of support in the community for this anti-BDS bill, but it is important for my colleagues to hear that. I think we saw that here tonight, so it is important that we have such a strong presence here,” said Kramer, who added he has attended every Advocacy Day since his first full year in the House of Delegates in 2007. I am hoping a lot of folks here leave energized to take up the initiative and get the message out there.”

In addition to pushing for an issue or project, many people used Advocacy Day as a chance to network and foster meaningful relationships with local leaders beyond just politics.

“Just being here, living in our Democratic system in ways that it should be experienced, is essential for America,” said Nina Beth Cardin, 63, a community rabbi and Baltimore native. “I’m afraid with all that is happening that we are losing the fundamental fabric of Democracy that keeps us strong. Democracy is not a spectator sport, but it’s a participant activity.”

Linda Hurwitz, 59, a Baltimore native and chairwoman of The Associated: Jewish Community Federation of Baltimore, said she feels confident Jewish legislators are committed to working on behalf of the community. She feels the face time cognizant residents such as herself and legislators get to have at Advocacy Day goes a long way toward accomplishing just that.

Among the issues Hurwitz hopes pan out are the BJC’s budget requests for $75,000 for its elder abuse program and for $350,000 in aging-in-place funding for Holocaust survivors.

“To put a face [to the name] and show a sense of passion with personal opinions means so much more than a one-dimensional piece of paper,” said Hurwitz, who has attended Advocacy Day three times. “I believe it is multifaceted when people come and share not only their passions, but their support of something that speaks to them.

“My concerns with everyone are from cradle to grave. We take care of every Jew.”

Sarah Mersky, director of government relations at the BJC, said this year’s Advocacy Day is one of the most noteworthy she has been involved with.

Those who attended Tuesday also had the chance to listen to remarks from Baltimore County Executive Kevin Kamenetz, Sen. Bobby Zirkin (D-District 11) and Kramer during a dinner reception in the Senate Office Building.

“It really is up to our community to make sure they are reaching out to their elected officials, which I think is one of the most important parts of this,” Mersky said.

Ron Halber, executive director of the JCRC, said he was also encouraged by the events of the evening.

“This was a very positive day,” Halber said. “There was strong support on almost wall-to-wall issues for all of our issues.” 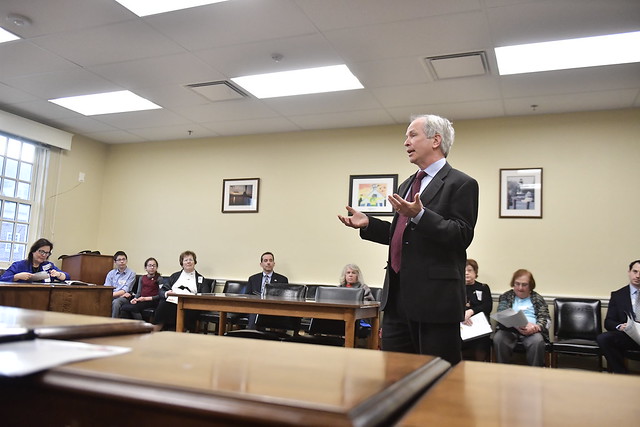