For as long as any of us can remember, our country’s Independence Day observance has been marked by traditional patriotism: barbecues, flag-waving, fireworks, local parades and all manner of family and community gatherings. It has been a warm, unthreatening, self-satisfying celebration that is open to all, reflecting a shared pride in our nation’s history and confidence in our future. And, of course, there are big store sales and beach parties to round out our casual yet pride-filled celebration of our nation’s birthday.

In the course of those activities, there is no need for party politics, boastfulness of our nation’s greatness or glorification of our military. We let our country’s impressive history speak for itself.

So it was with a bit of uncertainty, discomfort and concern that we awaited President Trump’s much-heralded Fourth of July celebration at the Lincoln Memorial, which promised, among other things, the powerful display of tanks and fighters and restricted VIP seating. It turned out OK. Although some tanks and fighters showed up, we weren’t subjected to a Communist Bloc-style military parade or even excessive rhetoric. Instead, President Trump’s Independence Day description of America as “one people chasing one dream and one magnificent destiny” was just fine. Of course, there were parts of the president’s speech that were properly criticized. Some challenged the historical validity of certain of his claims, and others, like conservative writer David Frum in the Atlantic, pointed to the fact that a good part of the speech “could have been given by Kaiser Wilhelm or Napoleon or Julius Caesar or the Assyrian Emperor Sennacherib,” since the point of the remarks seemed to be that “the U.S. needs to be feared by its enemies, since it can destroy them.” While the chest-beating bothered us, we were more concerned that the president’s words largely ignored the reality of our shared history and family stories (including his own), and the role immigrants have played in the growth and development of our great nation.

Over on the West Lawn of the Capitol, the annual “A Capitol Fourth” extravaganza of music and fireworks went on as usual. It rounded out the day’s celebrations with the traditional, feel-good display of talent, diversity and emotion, all wrapped in a patriotic theme that elevated our spirits. That corny, feel-good Americanism is just as comforting as each of the uniquely American ingredients that make up our Fourth of July barbecue celebrations.

Two years ago, “Capitol Fourth” host John Stamos told his audience an American story that resonates with most of us: “My grandfather came through Ellis Island from Greece,” he said. “Thank God that this country had open arms. He worked hard and, because of him, I’m here today.”

That’s a story that deserves to be repeated, and elevate us above the noise of boastful military hardware 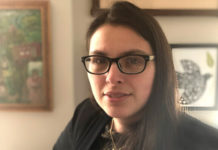