Sour, spicy, salty, sweet — these are the flavors I wish would hook up inside my mouth for date night, at the end of a long, sweaty day at the beginning of summer. When the sun is burning at its strongest angle, this savory combo is better than a Rita’s black cherry Italian ice to relieve the unrelenting heat that coincides with the summer solstice.

The solstice, which once heralded Midsummer’s Eve in ancient times, arrived yesterday, almost while it is still spring at the farmers markets here in Baltimore. As we are still near the longest day of the year, a great vegetable feast reflects that counterintuitive collision of the two seasons.

For most hardcore market enthusiasts, the ephemeral pea crop symbolizes the real beginning of the local season. The last of the spring peas are more starchy and substantial than their petite baby cousins, but the green globes of June pack a wallop of sweetness. When cooked to just-doneness, they explode inside your mouth with a slight pop as your teeth crunch down on each sphere. Only one Baltimore vendor bothers to bring shelled peas to market, elevating their status to something almost reverential, and there is always a long line of patient supplicants waiting for this pricey, perishable commodity. Peas are just the start of a string of shelled beans and legumes that lasts all the way through fall.

This is also the week when homegrown zucchini appears in the local markets, yellow and green spears not much bigger than one of those stubby, old-fashioned ballpark franks. Soon there will be a flood of summer vegetables, but right now the sudden appearance of these diminutive batons in almost every stall shouts, “Get ready for the deluge!” Pan-fried with onions, garlic and a shower of crushed dried red pepper flakes, the only thing these seared yellow coins need is a burst of fresh lemon juice, slicing through the glistening olive oil to create a warm vinaigrette.

New potatoes, no bigger than a robin’s egg and flecked with chopped parsley from the garden, are a creamy backstop to any spring meal. Sweet and mild, they can be eaten with their thin skins intact, just a drizzle of olive oil to make sure the salt, cracked black pepper, and green herbs stick to all their surfaces. Whack them in half after draining, dress while they are still steaming so they inhale all the flavors, and crack a lid over them so they stay warm but not soggy.

The surprise guest at this feast is ancient tempeh, fermented soybeans bound together into a firm matrix of dense protein. Tempeh’s nutty, intriguing, almost-but-not-quite bitter possibility brings a dimension of depth and complexity to this medley. These days, most tempeh doesn’t seem to require pre-steaming to remove bitter after-tastes, so it can be a quick addition to any meal. Just cube it, dress it with tamari (like soy sauce, only better) and mirin (sweet Japanese rice wine used in cooking), and add red pepper flakes if you like a little more heat. Stir-fry in plenty of olive oil, turning with tongs until each side is golden and crusty, and finish with a generous squeeze of fresh citrus.

Admittedly, this meal is generous with the olive oil, but it’s not exactly a state secret that salt and fat make everything taste good. When you start out with a palette of fat-free plant foods, it’s OK to add some back in the form of heart-healthy, mono-unsaturated olive oil, the backbone of the doctor-recommended Mediterranean diet. Although I generally use 1-2 tablespoons when I sauté in cast iron, some especially absorbent ingredients — notably tempeh, eggplant and mushrooms — may benefit from a bit extra to attain a good crust or sear.

Ultimately, use your personal tastometer to gauge the proper amount of fat and salt for each dish. Then, when a sweet pea and a salty morsel start to rhumba on your tastebuds, there won’t be any regrets.

> Bring two inches of water to boil in a 2-quart saucepan with a lid. Add peas and reduce heat to medium-low. Simmer covered for about 10 minutes or until peas are very tender but still bright green. Do not overcook or allow color to turn gray. Do not allow to boil. Drain peas and set aside, covered loosely to keep warm while finishing dish.

> While peas are cooking, heat olive oil in a medium cast iron skillet over medium-high heat, and sauté onions until softened and translucent, 2-3 minutes. Add shiitake mushrooms and stir-fry for another few minutes. When the mushrooms are wilted and some of the onions are just beginning to brown, season with salt and cracked black pepper, add the peas back to the pan and stir well to heat through and blend the flavors.

> Remove from heat and transfer to a separate bowl until ready to serve.

> Meanwhile, place whole new potatoes in cold, salted water to cover, bring to a boil, then turn heat down and simmer over medium heat until fork-tender, 10-15 minutes. Do not overcook. Drain well and return to hot pan (off heat).

> While potatoes are still very warm, whack in half, dress generously with olive oil, season with salt and pepper, and garnish with fresh chopped herbs. Cover with cocked lid so steam can escape.

> While potatoes are cooking, heat olive oil in a large cast iron skillet over medium-high heat and sauté sliced onions, garlic, and crushed dried red pepper flakes for 2-3 minutes until starting to soften and become translucent. Add, salt and pepper, stir, and cook for another minute or so.

> Add squash, season with salt and pepper, and mix well to stir onions and garlic up from the bottom of the pan. Cook, covered, for 8-10 minutes, stirring a few times, until squash begins to brown in spots and wilt.

> Remove from heat to a separate bowl and dress with juice from half a fresh lemon.

> While squash is cooking, marinate cubed tempeh in a dressing of tamari and mirin, tossing gently to coat evenly.

> When squash is done, heat olive oil in the same skillet over medium-high heat and sauté the drained tempeh, turning from side to side with tongs until evenly golden and crusty. Drain on a paper towel-lined plate.

> Turn into a bowl and squeeze remaining half lemon over hot tempeh.

Serve in separate bowls family style, or arrange each component in rows on one large platter for a composed warm salad. Combine leftovers and serve like a chopped salad.

You Should Know … Jaz Erenberg 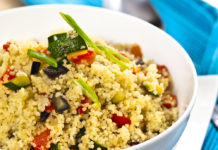