With the death toll in Egypt at now more than 1,000, and through its ongoing deadly security sweeps targeted at supporters of deposed President Mohamed Morsi, the Egyptian military has ended the pretense that it is supporting a civilian government and a return to the rule of law. Among the victims of the chaos in Cairo is a clear U.S. policy toward the strategically important nation.

President Barack Obama condemned the killings, canceled joint military exercises, and at press time on Tuesday, there were reports that the U.S. is either considering cutting aid to Egypt or already has suspended military aid. Arguments abound over how the U.S. should use its influence in Cairo — or whether the U.S. really has any influence at all. And there is something hauntingly familiar about military strongman Gen. Abdel Fattah al-Sisi’s apparent deaf ear to American urgings to stop the violence, halt the hunt for Brotherhood leaders, release Morsi from secret detention and return to a democratic process.

No one seems to believe that a cut off of $1.5 billion in aid will actually change Egyptian policies  — particularly since other regional governments appear willing to fill the monetary-support void the U.S. might leave behind. Nonetheless, advocates say that even if the generals aren’t moved by the action, it will at least be a clear statement of American values and a refusal to fund a crushing military regime. Those who oppose the move have argued that Egypt is too important a strategic ally in the region and that the U.S. needs Egypt’s broader strategic cooperation and assistance, even if its domestic policies and actions are oppressive.

Will Egypt become another Syria? There certainly are similarities: a military-backed government and a highly motivated Islamist opposition staring at each other across a widening chasm. Stuck in the middle of the dispute is an outmaneuvered and sidelined secular middle class. And while the violence has been largely coming from the military government, the opposition could soon take up arms as well.

If the U.S. still has the ear of the Egyptian generals, Washington should continue to insist that the military allow the civilians it has installed to actually govern; to let the government tackle the country’s crippling economic and constitutional issues; and to allow into the political process all Egyptians who oppose violence. None of these acts require the adoption of democracy or even adherence to U.S. values. But they could pull Egypt back from the brink of becoming another Syria. 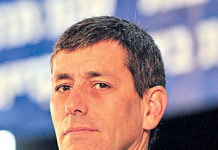 A victory for Israel … and Hamas?