With a collection of Jewish medical writings going back to the sixth century, a view into the back of a real ambulance and a series of interactive screens aimed at furthering a conversation about health care, the Jewish Museum of Maryland’s newest exhibit provides a tour of the Jewish physician’s journey in the United States.

“Beyond Chicken Soup: Jews and Medicine in America,” which opened earlier last month and runs until Jan. 16, 2017, walks the visitor through a half-dozen settings named for locations typically associated with the health care field. 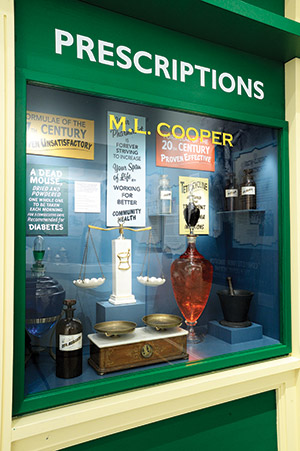 The first stop is the “university” that focuses heavily on Baltimore’s prominent Friedenwald family.

Dr. Harry Friedenwald, son of Baltimore doctor Aaron Friedenwald, collected a series of ancient manuscripts containing the earliest Jewish medical teachings and donated them to the National Library of Israel in 1948. He also translated them into modern English.

The room, set up to re-create Friedenwald’s study, contains the manuscripts as well as other mementos such an invitation to a lecture he gave in 1943 in Gilman Hall on the campus of Johns Hopkins University.

The exhibit is not to serve as a hall of fame, said Deborah Cardin, the museum’s director for programs and development. “But we do think being in Baltimore, there are a number of individuals who have contributed so much to medical advancement.”

The visitor then enters the “medical school” section that focuses on the struggles that Jewish students faced when applying for and entering medical school in the early part of the 20th century. This included quotas limiting the number of Jews admitted to doctoral programs across the country.

As can be seen in the letters that have been reproduced, most of the deans replied to Lazaron with the corresponding data backing up his assertion, although Cardin said he received a couple of angry responses suggesting Jewish students were “morally inferior” to Christians.

Cardin explained that education was a form of currency for Jewish immigrant families settling in the United States in the early 1900s, which partially accounts for the early influence of Jewish doctors in Baltimore.

“This was also a time when a medical education was part of the American dream, and that’s why you find this close association with Jews and medicine, and it becomes part of our aspiration to become fully accepted as American citizens,” she said.

The struggle among Jews to rise through the ranks in the medical community can also be seen in the “hospital” section that illustrates the push for a Jewish hospital during a time when hospitals of other faiths were unwelcoming toward Jews.

“In the mid-1800s prior to the establishment of Jewish hospitals, when Jewish patients went to Christian hospitals, they often found themselves at the mercy of a staff that was interested in converting them,” Cardin said. “And so there was a real desire to pull together and establish hospitals within the Jewish community and take care of itself.”

This led to the establishment of the Hebrew Hospital and Asylum in 1868, which later expanded to include non-Jewish patients and was renamed Sinai Hospital.

Among the highlights of this part of the exhibit is the back door of a real ambulance that the museum purchased on eBay and incorporated into the scenery.

“They took a slice off the back and sold the rest for scrap,” museum executive director Marvin Pinkert said.

The ambulance is just one of a variety of artifacts saturating the exhibit that illustrate the journey of the medical profession, including a violin that Dr. Morris Abramovitz played during college to earn money for tuition.

Abramovitz, famous for discovering a method of injecting multiple medications at one time into the body, emigrated from Lithuania in 1901 and opened a practice in East Baltimore serving the immigrant and sailor populations. The “doctor’s office” portion of the exhibit includes a replica of his workspace with a desk, chair, examining table and a scale that was donated by the Davidov family.

Howard Davidov, a retired Baltimore radiologist whose father Nathan was a general practitioner for 45 years, said when he heard the museum would be putting an exhibit together on Jews in medicine he felt his father “ought to be in it.”

“To me, medicine was his life,” said Davidov, one of several Jewish doctors in Baltimore who contributed either funds or artifacts to the exhibit. “He treated patients whether they could pay or not pay. If he made a diagnosis, that was the diagnosis, and this was before CT and ultrasound and all that sort of stuff.”

Nathan Davidov graduated from the University of Maryland School of Medicine in 1920 and later completed a residency at Johns Hopkins before opening an office on Eastern Avenue near the Patterson Theater. (His diploma can be seen in the exhibit hanging near Abramovitz’s office). Davidov said his father enjoyed medicine from an academic standpoint but was also devoted to his patients.

“He loved taking care of people, he loved helping people, and the intellectual puzzle of the diagnosis was something he really liked,” he said. “If he got a call in the middle of the night, he would drive to Highlandtown and see patients. They don’t make them like that anymore.”

In the “pharmacy” section, visitors can see and smell a number of remedies, such as cinnamon and mace, that were once used to treat patients. Much of this portion of the exhibit was made possible by pharmacists Neil and Dixie Leikach, who have owned Catonsville Pharmacy since 1999. Dixie Leikach contributed an oral history along with several artifacts from the Maryland Pharmacists Association for which she briefly served as interim executive director.

Among Dixie Leikach’s contributions is a photo of her husband at work in Catonsville Pharmacy. Neil’s father, Henry, was also a pharmacist and worked in the Klotzman Drugstore in downtown Baltimore, which, she said, is a point of pride for him.

Dixie Leikach said, “When somebody decides to do the same thing as their parents, it’s a proud moment.”

While most of “Beyond Chicken Soup” showcases how Jews have advanced within the medical fields through the last two centuries, it also deals with current ethical debates about health care within the public discourse. Visitors are invited to answer questions on interactive displays such as, “Should you be able to choose your doctor based on their religion?” and “Must a doctor speak your language?” The answer choice prompts a pie chart of the cumulative results from all the other visitors.

“One of the inspirations for the exhibit was that there are so many contemporary conversations around health care, so we came up with the solution of embedding content into the exhibit through these touchscreens,” Cardin said.

Aside from the displays, there are also several activities for children such as a dress-up section, where you can put on a white coat, and a matching activity called “It’s all Greek to me,” where visitors are asked to identify a Greek term with the corresponding disease in English.

In the final “fitness center” section, a large wheel called “What’s On Your Plate” is mounted on the wall, and spinning it allows visitors to see what foods people in the United States ate during each decade from the 1900s to the 1990s. The foods progress from creamed cabbage and mashed potatoes eventually to a fresh-looking piece of chicken with vegetables.

“In 1900, doctors advised to steer clear of spicy foods,” Cardin said. “The idea of eating a very bland meal was very popular.”

The amount of detailed information and activities was too much for Davidov to absorb in one visit, and he has since been back several times. He recommends taking your time while there.

“It’s just a very well done exhibit that everybody should go see,” he said.

The exhibit concludes with a slideshow of people of all ages and nationalities in the medical field at work, which Cardin said demonstrates the progress that has been made in health care.

“Is the Jewish doctor still a stereotype that’s really prevalent today? What we come up with is the changing face of medicine,” Cardin said. “And if you look at what the medical field looks like today, it’s a very different place than it was a century ago.”

‘Beyond Chicken Soup:
Jews and Medicine in America’