Fan violence at sporting events is disgusting, immature and unacceptable. And now, not even Oriole Park at Camden Yards can say it’s immune to it.

On Wednesday May 29, 25-year-old Hagerstown resident Matthew Fortese, out on a second date, attended an
Orioles-Nationals game wearing a New York Yankees hat. It’s doubtful that he ever could have imagined that a simple wardrobe decision would land him in the hospital fighting for his life.

Michael Bell, 21, of Annapolis and Gregory Fleischman, 22, of Jarrettsville took exception to the cap, shouting repeated taunts for the majority of the game. When, according to reports, one went as far as hurling a beer at him, Fortese decided to confront the two, climbing up the terrace box where Bell and Fleischman were sitting.

Police said Fleischman responded by punching Fortese in the face, sending him plummeting about five feet onto the concrete below. At the time of this writing, Fortese remains in the hospital in critical condition and reportedly has slipped in and out of consciousness.

First, why is there this innate animosity toward someone supporting a rival team? I too loathe the Yankees as an organization — does this mean I should resent the fans who cheer for them?

And, attending as many games as I have, I’ve seen plenty of playful ribbing — harmless jabs tossed back
and forth between opposing fans. Nothing about the heckling by Fleischman and Bell could be constituted as playful.

Sports, in general, can be so great, but far too often they bring out the absolute worst in people.

It’s likely that Fortese would have been better served to call an usher or a policeman or asked to have his seat changed. But anyone who thinks Fortese shares some of the burden for this outcome by wearing a Yankees hat in Birdland — and from reading message boards there are people with that opinion — needs to take a step back and realize how ridiculous that is.

Second, nearly 40,000 people att-ended the game that night. Not a single person in that section had the fortitude or decency to tell these two “Orioles fans” to simply shut their mouths, sit down and watch the game.

No one felt the need to grab an authority figure when the situation was clearly escalating. A handful of people took out their cell phones, but instead of calling for help, they recorded videos.

Sadly, that is what we’ve come to as a society. We love observing conflict, we just don’t want to help solve it. Why step in when you can be the first to post a video to YouTube?

The opportunity was there for someone to intervene — but no one ever did.

The culprits are Fleischman and Bell, and I hope their punishment is severe. But as Orioles fans, we let down Matthew Fortese. 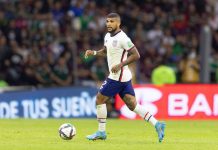