“You shall bind them as a sign on your hand, and they shall be as frontlets between your eyes …” (Deuteronomy 6:8).

The verse is one that we read every day in the Shema. It refers to tefillin, the little leather boxes that position between your eyes and on the top of your arm.

The first time one becomes obligated to wear tefillin is when he becomes a bar mitzvah, a 13-year-old. Women, according to Rabbi Mitchel Wohlberg of Beth Tfiloh Congregation, do not share that same requirement; girls are exempt from positive and time-bound commandments.

Putting on a pair of tefillin for the first time can be awe inspiring, says Rabbi Etan Mintz of Bnai Israel Congregation. He says tefillin “is a means to envelop ourselves daily with the words of the Torah and the Divine.”

For centuries, according to the rabbi, Jews have fulfilled this mitzvah. There were even tefillin found with the Dead Sea Scrolls in Qumran (those can be seen in the Shrine of the Book exhibit at the Israel Museum).
Today, tefillin can cost between $200 and $1,500, as they are generally handmade, the text written by a scribe with quill and ink on parchment.

“It takes precision and craftsmanship to make a pair of tefillin,” says Rabbi Mintz.

The sixth-grade boys at Beth Tfiloh Dahan Community School learn the lesson of tefillin each year, when they take part in a unique project called Kesher Tefillin run by Rabbi Noah Greenberg of Safed, Israel. The rabbi travels to the United States and spends 15 to 16 hours over the course of one week working with the boys to craft their own tefillin — and they are kosher.

Rabbi Greenberg, a well-known Israeli artist, launched the program when he was studying with his own son ahead of his bar mitzvah about five years ago.

“Of course, we were learning the halachos [Jewish laws] of tefillin. I started thinking about how tefillin are made with such heavy leather, needing hydraulic presses and all kinds of sophisticated machinery. Moshe Rabbeinu also wore tefillin — I don’t think he had that machinery in the midbar [desert].”

Rabbi Greenberg, who consults with rabbinic authorities for the plethora of complicated hal-achic questions involved, had the idea to use thin parchment instead of thick leather and to use an origami-like method to construct the tefillin boxes. Using goatskin parchment, he succeeded in designing a single piece, which could be folded to form the boxes. The boys use special hammers to cut the parchment, which is then folded and colored black; they then emboss the shins in the leather of the tefillin shel rosh [box that is meant for the head]. Rabbi Greenberg brings kosher parshiyos [Torah verses], which the boys tie up with calf hair and insert into the boxes. The tefillin are then sewn with cow sinew, and the boys learn to tie the special knots in the straps.

Every one of the 10 steps that are halachah l’Moshe miSinai [that are required by Jewish law], from the initial cutting to tying the straps, is done by the boys themselves. And, according to Rabbi Greenberg, while the boys are physically making the tefillin, they are learning the laws of wearing them and the famous commentaries about them.

Before launching the project, Rabbi Greenberg took the prototype tefillin to Rav Nissim Karelitz in Bnei Brak for approval.

Over the last four to five years, Rabbi Greenberg has done this project with close to 2,000 young men at summer camps and in day schools. The feedback: “I get from the children, from the parents, the rabbis, the teachers that this is a transformational experience in their lives as Jews.”

Rabbi Greenberg explains that tefillin is “one of the most focal mitzvahs in the catalog of mitzvahs,” of which there are 613. He says that everything in Jewish life is reflected in tefillin in one way or
another. Kesher Tefillin gives teachers an opening to discuss with students anything in Jewish life.

“It is all there,” he says. “This is not just about tefillin, but about their [the boys’] Jewish experience.”
Today, Rabbi Greenberg is doing the project with Ethiopian immigrants in Israel through the Jewish Agency and the Ministry of Absorption. He works through a translator.

“That has been one of the most moving things that I have ever done,” says Rabbi Greenberg. “It is a transformational event for them and me, and I am not even able to talk to them.”

One of the reasons that Rabbi Greenberg thinks the program has been so successful is that in this generation, children are used to everything happening with the touch of a button. The process of creating tefillin is “a genuine challenge to these children. They have to really invest in the challenge. … When they are finished they have invested so much — those tefillin are incredibly precious to them.”

“Children — and people in general — are looking for ‘genuinity,’” says the rabbi. “This program is genuine, it has real content and true impact.”

Tefillin, of course, is only one of the many mitzvoth that young men take on when they come of age. Rabbi Wohlberg says that at the age of bar mitzvah, people should “focus more on the mitzvah than the bar,” and youth should remember that this is the transformational moment from child to adult. Until 13 (12 for girls), one’s transgressions fall on the parents. At bar/bat mitzvah, the now young adult must take responsibility to his/her Jewish self.

“This is major, because you are very much an adult in the eyes of Jewish law. There is no difference between a 13-year-old and an 83-year-old,” says Rabbi Wohlberg, noting that a bar mitzvah boy should remember that he is a Jew and what that means.

“There are very few [Jewish men] like him,” says Rabbi Wohlberg. “He has to take those responsibilities very seriously.” 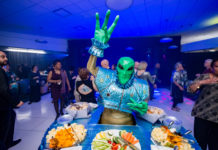