For the second time, Herbert Bergunder and his family traveled to Israel this August to celebrate a bar mitzvah.

“Sometimes a bar mitzvah or bat mitzvah in the U.S. makes a child seem very big, and religion seems beside the point,” Bergunder, a  Baltimore attorney and member at Baltimore Hebrew Congregation, said. “In Israel … your child reads Torah on a 3,000-year-old street [where rabbis walked]. The religion becomes large.”

The Bergunder family is not the only one to journey to the Land  of Israel to celebrate the 13-year milestone. While many still mark the occasion at their home congregations, going to Israel connects young teens to their deep Jewish roots while giving the entire family a meaningful experience.

“I think what it does is it connects their current reality of their practice of Judaism to our people’s  ancient and ongoing expression of Judaism in Israel,” said Baltimore Hebrew Rabbi Elissa Sachs-Kohen.

“This is a way to deepen the  experience,” she said.

Sachs-Kohen and her immediate family, including her 9-year-old daughter, Noa, wife and father, will travel to Israel next November as part of her son Manny’s bar mitzvah. Her kids have never been to Israel.

“Our goal is to give them a really wonderful loving taste of Israel, and our hope is to connect with some of the Israeli counselors they’ve had at Camps Airy and Louise,” Sachs-Kohen said.

On the Bergunders’ trips, both bar mitzvahs were held in the  Archaeological Park at Robinson’s Arch in Jerusalem. During the first trip, Bergunder said the family spent time learning about the country’s  political history, which included  visiting a family from Baltimore living in the West Bank as well as  a lacrosse coach in Ashkelon. On the family’s recent trip, they had Shabbat dinner with Israelis and met with Ethiopian Jews.

“We really wanted to understand and explore the Israeli experience from all angles,” Bergunder said.

Liora Hill and her family, also Baltimore Hebrew congregants, are preparing for the bar mitzvahs of twins Gabriel and Max next summer. They also plan to do something at their home congregation before they leave.

For Hill, who has two older kids, she’s seen her eldest son become a song leader at the George Washington University Hillel and start working for two synagogues in his freshman year. Her twin sons are not quite as involved in Judaism, she’s so hoping the Israel trip will pique their interests.

“I know every time I go literally feels different and you can’t help but feel something when you go there,” she said. “It’s my hope that they too will feel whatever that  special something beyond words, that undefinable meaningfulness in being in Israel.”

The family is currently working with The Associated: Jewish Community Federation of Baltimore on getting a tour guide, the availability of whom will determine when the family will take the trip. She is thankful Baltimore Hebrew gives the family the flexibility to have Max and Gabriel take part in a service before they leave for Israel.

“Baltimore Hebrew is definitely a home for us, so having one  foot in home and one foot in the world is connecting,” Hill said.  “It connects us.”

Gigi McKendric, artist and child of the Holocaust, on a lifetime of creation 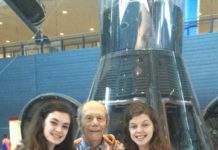