Hundreds applied when the casting call went out across Los Angeles.

Jewish Life TV was looking to star three Jewish grandmothers, or bubbies, in a new series pairing contestants with one of three potential suitors for a date. A handful of applicants were brought in to audition.

Lead producer Brad Pomerance and his crew learned that one of the potential cast members, Kathleen “Bunny” Gibson, was raised Catholic and only recently learned she was half Ashkenazi Jewish.

“I just thought that was the most interesting, unique, compelling story and really could potentially add a lot to our show,” Pomerance said.

Gibson, 73, grew up in Philadelphia and has decades of small roles to her credit. She has appeared on “Glee” and “How I Met Your Mother.” But Gibson is best known for having been a dancer on Dick Clark’s television sensation, “American Bandstand,” from 1959 to 1961.

The TV star was raised Catholic by her mother and adoptive stepfather. She never knew her biological father. When her mother died when Gibson was 27, his identity was lost. A year ago she took a DNA test from ancestry.com hoping for a connection to him. To her shock, she discovered something else.

The test showed she was 50 percent Ashkenazi Jewish, most likely from her mother’s side. She was in disbelief — and took a second DNA test from 23andMe. But the results were the same. Gibson had no clue of her Jewish heritage growing up, although she did always wonder why no one else in school liked bagels with lox as much as she did.

“It rocked my understanding of my identity,” Gibson said. “Growing up, it was like we’re Christian and you’re Jewish, and it was always that division when I was young. I feel now that I embody both heritages.”

Gibson has learned a lot about Jewish religion and culture from her fellow bubbies, S.J. Mendelson and Linda Rich and the contestants on “Bubbies Know Best.” She now tries to incorporate Yiddish into her vocabulary, with “oy vey” being one of her new favorite things to say. The two bubbies have embraced Gibson, even inviting her to dinner.

“Bubbie Linda and Bubbie S.J., they’re my new sisters,” Gibson said. “I’ve found a family in this Jewish community. I’ve learned their warmth, their openness and their love for me, and that is so beautiful.”

Pomerance said he appreciates Gibson’s enthusiasm to learn and embrace the culture. It’s heartwarming to him when she tries to speak the language, even when she stumbles on the pronunciation. He’s even impressed by her humor.

“For somebody who didn’t grow up Jewish,” Pomerance said, “she has a lot of that Jewish humor, that schticky Catskill-type humor. Maybe it’s genetic, who knows.”

The show marks the second time in Gibson’s life that she’s been embraced by the Jewish community. While on “Bandstand,” Gibson was often bullied and harassed by her fellow classmates at Holy Cross Academy in New Jersey and at St. Hubert Catholic High School. With rock ‘n’ roll considered taboo by many at the time, students at the Catholic school shunned her.

Gibson recalls nuns ripping out her beehive hairdo, cutting her nails with pinking shears and dragging her down the hallway by her hair. Despite the harassment, she was going to be on “Bandstand” no matter what. But after receiving death threats, she decided it was time for a change. Enter Northeast High School.

One of Philly’s oldest high schools, at the time it was home to a large Jewish student population. They welcomed her with open arms, and she was quite popular. She even went to her senior prom with a Jewish boy named Bob Shuman.

“Quickly, when they found out who I was, instead of walking down the hallway and having people say these nasty remarks, I had teens look up to me as a ‘Bandstand’ star,” Gibson said. “They appreciated that I had the chutzpah to go to ‘Bandstand’ during a time when in the ’50s it was looked as dancing to the devil’s music, rock ‘n’ roll. But they thought it was wonderful.”

Today, Gibson proudly wears a Star of David necklace. What she likes most about Jewish culture is how family is at the center. Gibson’s family has embraced its newly found cultural identity, including her two daughters, four grandchildren and two great-grandchildren.

She appreciates how everyone has been so welcoming of her being “new to the tribe,” as Gibson puts it. One day she hopes to cross off visiting Israel and her 11 relatives who live there from her bucket list.

Pomerance said the network is airing the first six episodes of “Bubbies Know Best,” with a second batch to begin production soon. He said Gibson’s story shows how welcoming the Jewish community can be to new members.

“It was a tough 20th century; we don’t have a lot of Jews to waste. So if someone wants to be part of the tribe, we should welcome them with open arms,” Pomerance said. 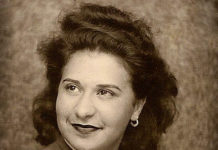