The rabbi blows the shofar, the musical director belts out “Shalom Aleichem” and a new Hebrew school in Annapolis is born.

Holding classes for kindergarten through grade 7 and youth programs for grades 8 through 12, the new religious school will bring more Jewish programming to Maryland’s state capital. After constructing and approving an eruv around Annapolis earlier this year, Kneseth Israel’s Rabbi Moshe Weisblum looks forward to expanding the Annapolis Jewish community even further.

“This is a big historical moment for our synagogue,” said Weisblum. “It is another dream come true for me. My shirt reads, ‘Chai Achievers of the Jewish Education Center of Anne Arundel County.’ I wear it proud.”

Handpicked by Weisblum, JEC’s director of education, Ellyn Kaufman, has 38 years of Jewish education experience, 13 of which are in Anne Arundel County. When she joined the JEC team, she expected to run a small religious school. However, as word spread about the school, so did the number of enrolled students.

“We started with just seven students, but the number kept growing and growing,” said Kaufman. “Right now, we have 46 students, but it might increase even more.” From parading the incoming students in matching t-shirts to meeting this year’s teachers for the first time, Sunday’s opening ceremony was a small slice of the 2014-2015 school year. The school’s core curriculum focuses on Jewish holidays, fundamental values, religious customs, Hebrew, Israel and Torah. While the students eat apples and honey during recess and create Shabbat boxes filled with Kiddush cups and candlesticks, JEC takes a hands-on approach to teaching.

It recruited baritone opera singer, actor and voice teacher Shouvik Mondle to lead its children’s choir. Born in Calcutta, India, Mondle has entertained in operas around the world, and most recently, trained children to star on Broadway.

“I used to work with, teach and train children who starred in Billy Elliot and Mary Poppins on Broadway,” said Mondle. “Music is my passion, and I cannot wait to work the students at Kneseth Israel.”

“This school has already gone above and beyond my expectations,” said Kaufman. “Although I was a little hesitant to start a Hebrew school at first, I am so blessed that Rabbi Weisblum chose me.” 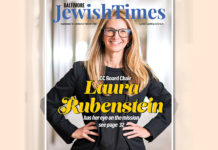