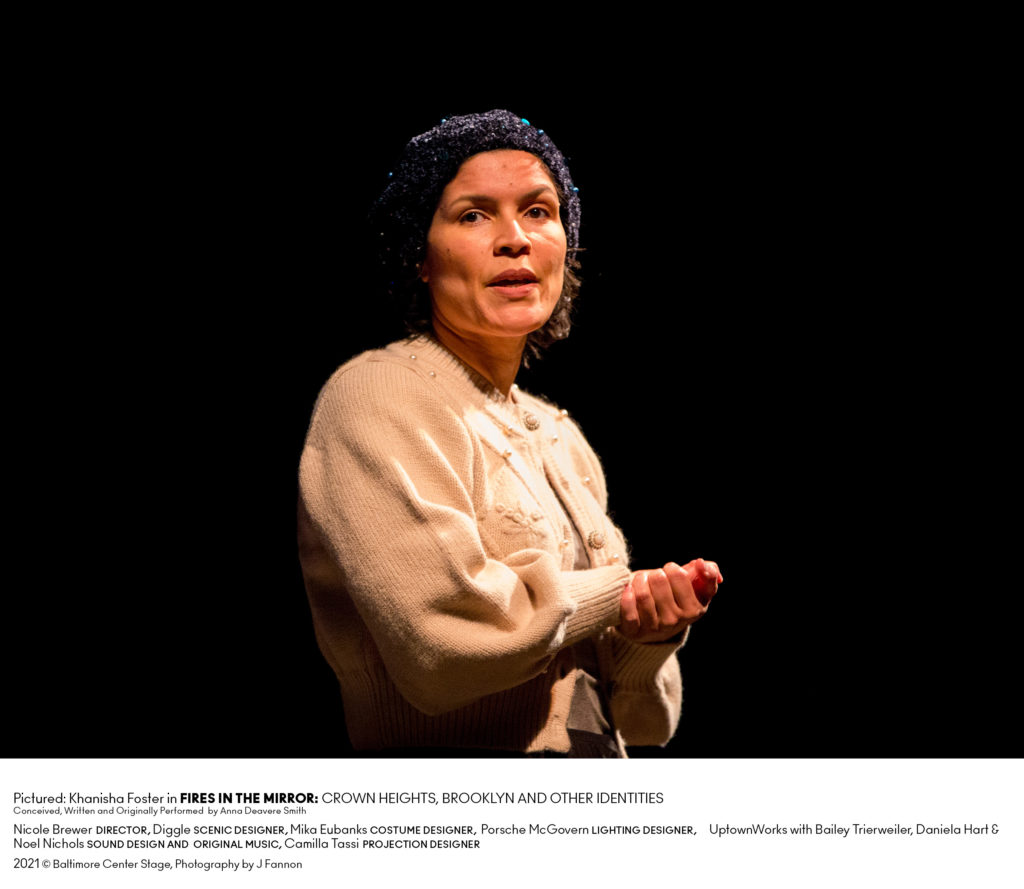 One August evening in 1991, long-simmering tensions between the Black and Orthodox Jewish residents of Crown Heights, Brooklyn, boiled over after 7-year-old Gavin Cato, the child of Guyanese immigrants, was killed in a  car crash involving the motorcade  of Rabbi Menachem Mendel Schneerson,  the Lubavitcher Rebbe who led the  Chabad movement.

There are many interpretations of the exact nature and origins of the riot, which was later described by historian Edward S. Shapiro as “the most serious anti-Semitic incident in American history.”

One interpretation can be found in Anna Deavere Smith’s 1992 play, “Fires in the Mirror: Crown Heights, Brooklyn and Other Identities.” Through Dec. 19, the play will run at Baltimore Center Stage in partnership with Long Wharf Theatre, with Nicole Brewer — an advocate for anti-racist  theatre — serving as director.

Smith, an African American actor and playwright, interviewed more than 100 people — Black and Jewish residents of Crown Heights, as well as religious leaders, politicians, musicians, writers and intellectuals. She chose the oral histories of 26 different people to use in the play. “Fires in  the Mirror” juxtaposes the individuals’ viewpoints and identities.

Through 29 monologues, the play  highlights that the Crown Heights  riot is more complex than Black versus Orthodox Jew.

Nearing its 30th anniversary, the  play has come to Smith’s hometown  of Baltimore.

Chiara Klein, director of artistic  producing at Center Stage, has not  professionally worked on a play centering on  Jewish identity since directing “Fiddler  on the Roof” in high school. But for  “Fires in the Mirror,” Klein, who is  Jewish, is serving as cultural competency consultant.

“While there was a rigor in the research and open hearts, open minds mining of the text, it became very clear that there was not any Jewish identity in the room,” Klein said, recalling that Hebrew words were mispronounced at the first read-through.

Brewer and the actors — all 26  characters are played by

either Khanisha Foster or Cloteal L. Horne, depending  on the day — recognized that this lack  of Jewish representation could decrease authenticity and “also be an opening  for potential harm,” Klein said.

To fill that gap, it just so happens that Klein has five generations of Jewish relatives in Brooklyn. But  while she does have knowledge of the Chasidic community, there are “edges” to her Jewish identity and experiences.  And so she brought in a team to ensure that the production is informed  by multiple Jewish narratives.

“I was actually caught by surprise the degree to which I felt like I was needed,” she said. “I was required by myself to  show up in a different kind of way than I often do in these spaces. I am not only  a theater artist, I am also out there as a Jewish person living in America.”

Klein is also a descendant of Holocaust survivors, and has had experiences as a cantor, as the president of Dartmouth Hillel and as a member  of Chabad.

“These parts of me are always  operating when I make theater, when  I do anything in the world,” she said. “But being able to inform the room — not in an ‘I’m the expert on all things Jewish’  way, but being able to show  up with all of those colors —  has been very transformative.”

For example, in the play, Yankel Rosenbaum’s brother Norman delivers a Hebrew translation of “My brother’s blood cries out from the  ground,” a rephrasing from a line in the biblical story  of Cain and Abel. However, according to Klein, the script’s transliteration does not  align with the Hebrew,  certainly as spoken by someone  from Australia.

She and her team were able to figure out the correct pronunciation, which she said enriched the play, representing how, like any other group, “Jews aren’t  a monolith.”

Brewer, as director, is also drawing on her cultural experiences while creating spaces where the most marginalized groups — in the U.S., Black and Indigenous communities — can feel centered.

“What does being there cost their body? I think about this because I’ve been in too many spaces where the impact on my body hadn’t been considered even a little bit,” she said. “I show up and generate experiences tailored to these folks. I’ve found that this often creates the conditions for all  people to come and share parts of themselves that they may have had  to suppress.”

Brewer said that, with this show, her role is that of a facilitator: supporting the artists through listening and acknowledging the “blood memory that’s present in people who descend from folks who’ve had an  oppressive history or lineage.” She aims to avoid focusing on that trauma by fostering joy, healing and transformation.

While Smith’s play is about ruptures in community, Brewer is trying to bridge these differences by building empathy. Audience members should not leave feeling broken or more entrenched in their views; instead, the play must promote empathy.

“The show by itself is not complete,” Brewer said. “Our bias and our prejudice flare in our bodies and need tending to.”

The ending of the show will reflect this, she said,  noting that it is important for viewers to think about what happens when neighbors see each other being treated with humanity they’re not being afforded. Shields get  put up and passed down as a means of surviving and protecting things like language, tradition or religion.

Klein encourages show-goers not to take sides or double  down on their beliefs, but to  listen, noting that “it’s sometimes easier to talk about things that are happening now when it’s through a lens of something  that happened a long time ago.

Brewer hopes that, after leaving the show, audience members have conversations in their communities about how they and their loved ones might see themselves in the play and how they can disrupt harmful ways of interacting with other groups.

“Across cultures, across faiths, across various peoples,” she said, “you will find that the beginning part of that process is hearing each other’s stories.”