My bar mitzvah parsha is Shemot. Shemot is an action-packed parsha. Moses is rescued from the Nile as a baby. Then, he kills an Egyptian taskmaster. God appears to Moses through ancient Skype, a burning bush. Moses is called on by God to speak to Pharaoh on behalf of the slaves. From all of these stories, one verse in particular speaks to me. After Moses asks Pharaoh to let the Hebrews go into the wilderness, Pharaoh responds by increasing their workload even more. As a result, the Hebrews complain bitterly to Moses. Moses turns to God saying, “Lamah hareotah la’am hazeh lamah zeh shelachtani.” Loosely translated, this means, “Why have you made things worse for this nation; why did you send me if it is just going to make things worse?”

This verse stands out to me because it illustrates how in Judaism we are allowed to ask questions to God directly, without an intermediary. I am comfortable praying to God, asking God, blaming God and challenging God, and I am unsure that these opportunities exist in the same way in other religions. In Judaism, rabbis help fellow Jews with philosophical and religious problems and teach as Torah scholars, but we do not need rabbis to form a congregation to worship to God. This is important to me because I do not want to have my rabbi shape the exact nature of my prayers. I value being able to pray in my own way. I can pray in a haiku or in a question; they are all valid prayers in the Jewish religion. It is also important to me that I am allowed to pray to God sometimes with questions. In Judaism, in my family, in my shul, in my school and in my community, questions are praised to foster learning. Moses’ challenge to God shows his leadership skills because having the willingness to challenge God takes massive amounts of chutzpah, a bravery that is important in a leader.

In many places in the Torah, Jews ask God or challenge Him. Jonah goes against God’s instructions. He is supposed to go to Ninveh but instead runs the other way to Tarshish. Even though he runs away and gets punished, he is still comfortable questioning God. The father of our people bargains with God. Abraham negotiates with God not to kill a lot of righteous people in Sodom. He uses very strong language. He says, “Far be it from you to do such a thing.”

We have a tradition that direct communication between individual Jews and God is not only allowed, but something to be encouraged.

All of this is an important lesson for me. This parsha teaches me that we, as a Jewish people, are very lucky to be part of a nation that can ask questions and challenge God and grow to be better people because of it. 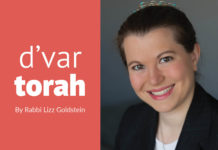