The thick scent of a peppery rub wafted through the Margolin Heb-rew Academy, and Corky the Pig embroidered his chef’s hat with a K and became a cow.

Just before Purim, the famed Memphis barbecue joint Corky’s, with a hog for its mascot, koshered one of its smokers for a brisket fundraiser on behalf of the city’s Orthodox Jewish day school. Organizers explained that the unusual marriage of brachos and BBQ was a product of a parlous economy, a small school in need of refurbishing with a limited fundraising base and the laid-back traditions of a “Shalom y’all” Southern Jewish way of living.

“We need to find any revenue we can,” said Rabbi Gil Perl, the school’s dean. “We asked ourselves, ‘Do we have a product here valuable enough for a large market nationally?’”

In Memphis, one answer to the question was barbecue, and one of the best answers was Corky’s, a top-rated eatery with three branches in the city.

In a town known for offering the best in barbecue, Corky’s is routinely cited in national best-of lists. It also happens to be owned by the Pelts family, which is active in the local Jewish community.

And in case you missed the point, atop the menu, grinning from under a chef’s hat, is Corky himself, a pig. (Legend has it that Don Pelts was an unreconstructed fan of the 1980s film “Porky’s.”)

Dena Wruble, the Margolin parent who came up with the Corky’s idea, was undaunted by the prevalence of pig on the menu. Sometime in the 2000s, she recalled, Don Pelts purchased a new smoker, and before its inaugural use on a pig, lent it to the school for a brisket barbecue. Perhaps that could be replicated.

A new smoker can cost $10,000 — that wasn’t in the offing. Woodman had another idea: Kosher a smoker already in use and donate it to the school permanently. Woodman committed the koshering to film.

“Next time you’re in town, you’ll have to see it, it’s pretty funny,” he said in a phone interview. “We lit it up with Sterno and put wood in the chamber. We had to get it up to 700 degrees. It almost melted. The racks did melt. We had to buy a new set of racks.”

The smoker ready, the parents committee set about seeking kosher brisket. They exhausted a supply in St. Louis and had to call Atlanta for more. For sales, they put out the word through social media; orders came in from as far afield as Los Angeles, New Jersey and Toronto. One buyer made inquiries about how best to pack the meat for an Israel trip.

The smoking and preparation took place on campus, with Corky’s staff in place. Perl recalled the nonplussed reaction of the religion reporter for the Memphis Commercial Appeal, who arrived on campus to cover an unrelated story and saw a truck plastered with a big smiling pig.

“I almost felt bad having that in my driveway,” Perl said. “Almost.”

In honor of the occasion, Woodman converted the Corky figure to a cow and plastered a K on his chef’s hat. No one batted an eye, Woodman and Perl said; Memphians are easygoing folk, including the 8,000 Jews among them.

“I know, it’s funny, a Jewish family owns a pork barbecue place,” he said. “But everyone has always been extremely welcoming.”

In any case, the kosher cow is familiar to Memphis Jews from the occasional Jewish event catered by the family-owned business.

“Some of the promotions also had a line through the pig,” Woodman said. The restaurant’s prize-winning sauce is certified kosher. Perl said replicating Corky’s pork-smoking techniques on brisket fit into a longstanding tradition.

“We Jews have learned how to imitate every other part of [secular] life, so why not this too?” he asked.

“Someone came in during the smoking,” Perl recalled. “He said, ‘Your school doesn’t look too good, but it sure smells good.’” 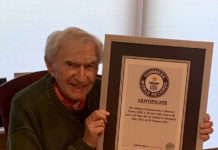 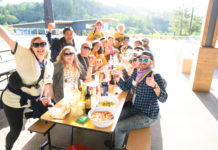