Parshat Bamidbar begins with a census of non-Levite men aged 20 or over who were fit for battle. Counting Jews directly is forbidden. Hosea 2:1 says: “And the number of the children of Israel shall be as the sand of the sea, which shall neither be measured nor counted.” Commentaries indicate that counting Jews directly can bring justice to individuals who, if deemed unworthy, may be punished. Perhaps the reluctance to count Israelites also derives from the understanding that it is all too easy to make human beings into statistics. History shows that counting people can be hazardous when done improperly, but empowering when done properly.

Counting people can be dehumanizing. Nazis dehumanized Jews by replacing their names with numbers tattooed on their arms. In the 1787 U.S. Constitution, enslaved African Americans were counted as 3/5 of a person. They were dehumanized by being considered property and being valued as less than a whole person.

The 2020 census shows us how counting done right is empowering. Census numbers determine how many congressional representatives each state gets. Those numbers also determine how many federal dollars for programs like school lunches and Head Start are allocated to each community.

Due to the potential dangers of counting people, our ancestors found creative ways to do so. The first census allowed people to make a half-shekel donation to the Sanctuary. King Saul counted the Jewish people by having them submit a shard of pottery. Unlike King Saul, King David counted the Jews directly, resulting in a plague killing more than 70,000 Jews. In Bamidbar, Ramban points out that each person is counted, by name, before Moses and Aaron, and recognized as an individual. The result of liberation is a society where no one is reduced to a number, but where everyone counts and is accounted for.

Bamidbar 1:2 teaches us that God counts God’s people out of love: “Se’u et rosh kol adat B’nei Yisrael,” which literally means, “Lift up the head of every person in the community” (Bamidbar 1:2). God wants every single one of us to lift our heads proudly,
to let our faces be seen in their uniqueness, and to know that we are equally worthy of love as children of God. 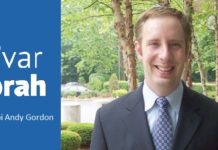 Infusing holiness into our days