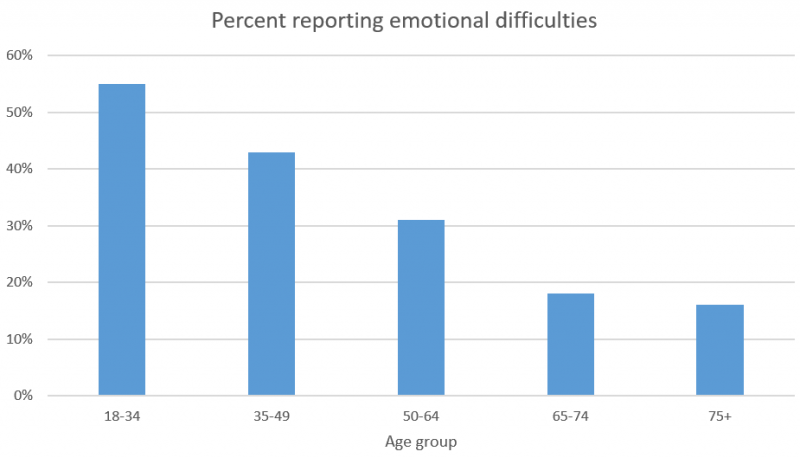 Young people have had the hardest time coping, financially and emotionally, with the effects of the COVID-19 pandemic. This conclusion comes from a recently published study by Brandeis University, which collected data from Baltimore and nine other Jewish communities across the U.S. Other findings show online Jewish activities are succeeding, in some regards, and interest in health care and social justice issues have slightly increased for Jews since the pandemic.

“When we were planning this study, much of the concern was on seniors,” said Janet Aronson, associate director of the Cohen Center for Modern Jewish Studies at Brandeis University and co-author of the study. “And so we were really surprised to see this finding about young adults.”

The study was conducted in May and June, and the data is not representative of the Jewish community as a whole. However, their research on young adults is in line with other studies. Young people are more likely to have suffered a financial setback and have less confidence things will get “back to normal.” They struggle the most with emotional difficulties and loneliness, even as the data shows they are the most likely to have an adequate support group.

“I think they’re more reliant on casual social encounters,” Aronson said. “And to have to go home and be in their parents’ house, they’re really socially isolated. So it’s not a question of talking to people or having people in an emergency. It’s sort of all of the casual socializing has ended.”

Martin Himeles echoes that sentiment. He’s the chair of the Research Grants Workgroup at The Associated: Jewish Federation of Baltimore and co-chaired the Baltimore Community Study. He said that young people tend to have more uncertainty.

Across the board, people who were financially vulnerable before the pandemic were more likely to have their situation get worse. Aronson worries these numbers will continue to go up as more benefits from the CARES Act go away.

“Many of them are employed full time. Many of them have college or graduate degrees. And so you might think of these people as the working poor,” Aronson said. “And I think that one of the challenges there is that those who might not have needed finical services in the past and don’t know how to access them.”

Despite the challenges, the report shows that donations to Jewish causes and charities remains high, if not slightly increased.

Himeles said it’s important to engage people through programming, in addition to assisting the vulnerable with charity. About 80% of respondents have participated in some form of online Jewish programing, with the largest bloc coming from young adults. While the new platforms did well in connecting people to programs, the data also shows small amounts forming new people-to-people connections.

“We need to do better in that area, because although there is greater interest in our programing that increased interest is not leading to increased personal connections,” Himeles said. “And we need to find ways to use online programing to help people deal with the isolation and challenges the pandemic has created.”

Aronson says while the programs didn’t do much to bring new people into the fold, it made participation easier for individuals who were already engaged in the community, especially because many of the events were free.

“Online Jewish life has managed to overcome some of the financial barriers to participation in Jewish life,” Aronson said. “That’s a good thing and that really points to some opportunities and policies.”

Data also shows that the pandemic has caused a slight increase in Jews saying issues like health care, politics and social justice are their top causes of concern.

“Often with our studies of the Jewish community, we look at issues related to Jewish life kind of in a vacuum,” Aronson said. “We say ‘how has your interest in Israel changed’ or ‘your concern of anti-Semitism and how has it changed’ but we don’t look at it compared to other things. And I think that’s very interesting here. To say that all of these Jewish interests hasn’t changed, maybe slightly decreased, but all of these other interests have increased in the same amount of time.”

In general, the more involved with the Jewish community a respondent was, the bigger role Judaism played in helping them through the pandemic.

“We’re looking at ways to continue to obtain information about how the community is dealing with the pandemic, which has stretched on far beyond what anybody anticipated at the outset,” Himeles said. “And there’s been some good news about vaccines … but we still have a way to go.”