Gabi Faye still remembers the day, at age 11, when she learned what had occurred during the Holocaust.

Like most Orthodox Jewish kids in Baltimore, she had been introduced to Holocaust history in Jewish day school at a very young age. Faye, who attended Krieger Schechter Day School, had studied Kristallnacht, the night of broken glass, and why, more than a half-century later, Jews across the world still commemorate that fateful date.

And like most 11-year-old Jewish children, she had an intellectual understanding of the inextricable link between history and community. She knew her family and her friends had lost aunts, uncles and grandparents during the war. The victims were people she had never personally met and only knew vaguely by description. But their stories were part of her heritage, just the same.

It wasn’t until she heard her cousin, Leo Bretholz, speak — first at Baltimore Hebrew Congregation, then at Chizuk Amuno Congregation — that she finally comprehended the courage and heroism that it often took to survive during the Holocaust. Her parents had taken her to hear a talk by a gentleman described to be her grandmother’s first cousin, a shy, reserved man, Faye said, who for years had suppressed the urge to talk about his remarkable and often brazen escapes from the hands of the Nazis.

In time, and with much encouragement, Bretholz began to open up. Faye said it was toward the end of his life that he began to realize that his story needed to be heard. “[Because] how else would people know what really happened?” she remembered him telling her.

One of the people who helped Bretholz realize the importance of his story was Baltimore Sun columnist Michael Olesker, who had met Bretholz after he immigrated to the United States and settled in Baltimore. Bretholz and Olesker eventually co-authored his autobiographical story, “Leap Into Darkness,” which was first published by Woodholme House Publishing in 1998 and later by Anchor Books.

Bretholz’s autobiography recounts his experiences, beginning at age 17, of when the Nazis marched into Austria and annexed the country. His mother’s urging to flee set him on a determined trek across much of Europe, during which he was captured seven times by the Nazis and subsequently escaped — including from a train headed to Auschwitz.

It was during one of Bretholz’s book presentations that Faye first learned that a cousin of hers had not only eluded Hitler’s troops in Europe in the 1930s, but had carried out multiple escapes from the Nazis with amazing chutzpah.

“I remember sitting there [listening] and being so dumb-founded by this man who time after time escaped death from the Nazis,” said Faye. At the time, she said, she had no real understanding of what people were forced to do to survive during the Holocaust. “I said to myself, wow, that is such an incredible quality to never lose hope and keep trying.”

That appreciation eventually became an impetus for her own life, said Faye, who went on to pursue her own dreams: a career in film and theater.

“When you see something like this, it puts everything into perspective,” said Faye. “[While] it’s very easy for us to get wrapped up in our personal problems … there’s always someone that is struggling or having a harder time than you are. Not to say that all of those [issues] aren’t important and real, but I think there are certain people and situations that happen in your life that just inspire and make you remember what is really important.”

And Faye has used that inspiration well. After completing her bachelor’s in theater and dance at Rider University in New Jersey in 2012, she went on to hone her experience at Kingston University in the U.K., setting her sights on an accomplished acting career. Since then, she has performed in more than a dozen movies, TV series and theater productions, realizing along the way that she has additional talents and interests that she could apply to film. She is the director and producer of the short films “Dirty Girl” and “Stripped,” both of which aim to deliver hard questions about women’s rights in society and the legal system.

In 2019, Faye and business partner Cameron Ring, 33, launched Andromeda Films production company and optioned Bretholz’s book, “Leap Into Darkness.” Faye and Ring say they were both drawn to the story for what it reflects about human nature and human potential when faced with seemingly insurmountable odds.

“When we founded our company, we talked about what is important to both of us and we both agreed that social impact projects are really what we want to do,” Faye said.

Ring comes with his own notable accomplishments in film, and his own passion about social impact stories. His most recent film, “Awesome Gal,” for which he wrote the script and was the lead actor, has won 12 awards to date, including Best in Show for the Depth in Field International Film Festival and Best Actor in the WRPN.TV Short, Tight and Loose Global Film Festival. The short film zeroes in on Tennessee’s historic walking horse industry and the inhumane and debilitating treatment of “soring” that is used by some to develop the horse’s unusual and painful gait. The film centers around the unlikely bond that is forged when a young girl, also abused, rescues a horse.

“Leap Into Darkness” carries its own powerful message as well, said Ring. “I want it to be an inspiration for other people to fearlessly stand up for themselves. Because if you can do it in a situation [like Bretholz did], there is no excuse for anyone else not to stand up for what they believe in.”

Faye sees both power and the potential for optimism from Bretholz’s harrowing story — one that she feels carries forward to today.

“I think that attitude is everything and you can find beauty in even the most horrendous and ugly situations,” Faye said.

For Ring, it’s the story’s ability to simultaneously reflect the “reality of life and its beauty and its tragedy together” that makes Bretholz’s autobiographical story so compelling. His flight across Austria, Germany, Luxembourg and briefly to Switzerland, where he was turned away from the border, is filled with constant uncertainty and seemingly insurmountable challenges. In time, he makes it to France where he joins the resistance, before immigrating to the United States. His journey to a safe haven takes seven long years to complete.

For the two producers, Bretholz’s death in 2014 was as inspiring a part of his legacy as his escape from the Nazis. “You know what’s crazy?” Faye said. “Leo passed away peacefully in his sleep in his 90s.”

“It shows what it really means to be a hero,” Ring added, noting that he felt that North American society’s tendency to extol the performances of celebrities and athletes often stood in stark contrast to the true accomplishments of the Leos of this world.

“Leo was a hero and his act of heroism was a whole lifetime of fighting against oppression,” Ring said. “Leo was a hero because, when he died in his sleep, he had a triumphant life.”

Ring and Faye already have six films on the docket, including a film that explores the story of Ring’s uncle, who served in the U.S. military during World War II. Ring said his uncle wasn’t prone to talking about the war, either, but carried some amazing stories about the war and the men he met that need to be told.

“My uncle never talked about [his experiences] much until the end of his life, but we know he went from Normandy all the way across Europe to the Russian border and came back and was in the Battle of the Bulge,” Ring said. And despite what he endured, he survived to live out his life in America.

Ring’s own service in the U.S. Army National Guard, he said, will benefit their efforts to tell these two distinct but moving stories, which will invariably rely on detailed historical and military research. But it will also rely on a keen eye and the ability to translate the emotion of a story to film, something for which both producers have a demonstrated skill.

“I find that film, when it’s based on a real person or a real story, is much more moving and people relate to it more because it really happened to a person,” Faye said.

Ring agreed. “Film captures emotion better than any other medium.”

Andromeda Pictures is currently in the process of raising the funds for both projects. They are eager to start filming.

Faye surmised that her cousin’s real reason for writing a book was simply to make sure people — particularly those in his new homeland — were educated about what had really happened in the Holocaust. “Writing a book just gave him wider reach and allowed his story to be shared anywhere and as often as possible,” she said.

Making a movie about his experiences, Faye said, would help to carry forth that message so future generations would remember as well. In today’s digital age, she noted, not everyone will sit down to read a gripping autobiography, but most can’t pass up an action-packed true-to-life movie in which the hero wins.

Jan Lee is an independent journalist living in Canada who writes on Jewish culture, history, business and the environment. 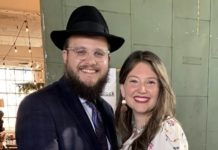