It’s no secret that social distancing measures intended to mitigate COVID-19 have led to businesses closing and employees being furloughed or laid off.

On April 2, the Maryland Department of Labor Division of Unemployment Insurance reported a total number of 42,334 insurance claims for the week of March 21 — a spike of 94.36%, according to WBAL.

The stay-at-home directive has brought businesses and other institutions to a standstill. Restaurants are still allowed to provide curbside pickup and delivery options, but the industry, which depends on on-site social connections, is experiencing devastating losses. Jewish restaurant owners spoke with the JT about some of the challenges they have faced in the last several weeks.

A third location of Lenny’s Deli, of Corned Beef Row fame on Lombard Street, closed in 2017 so that focus could be placed on the Owings Mills and Casino locations.
“We are taking every precaution — socially distancing, washing hands constantly. And we are doing only carry out and delivery,” said Smith, a longtime member of Beth El Congregation in Pikesville. “It’s a challenge, but I am optimistic that when we get through this, we’ll be fine.”

“We are doing triage in terms of paying everything,” Smith said. “We are waiting on the money from CARES — once we get that, we can pay rent, utilities. We already had carry out and curbside deliveries, and the menu is the same — you just can’t eat inside.”

Smith feels the need to be optimistic, notwithstanding the challenges ahead.
“I have my moments, but we will get through this, and hopefully we will learn from this,” he said. “We are fortunate that there are no illnesses in our ranks.”

“The financial impact is very serious, but the thing that weighs on me even more is the status of all the great people who work at Cosima,” said Judith Golding, proprietor of Cosima, who grew up attending Tree of Life Synagogue – Or L’Simcha Congregation in Pittsburgh. “We’ve been able to keep paying salaries and some support to hourly staff, but this can’t continue for very long.”

Cosima is currently doing business via delivery and carry out, which, Golding remarked, is helping as “it keeps a little money rolling in. Also, cooks want to cook so it’s nice for them.”

Prior to the pandemic, Cosima employed 35 people. As of the writing of this article, Golding said that no one has been laid off.

But the losses are hard felt. For one, customers can no longer enjoy what Zagat described as a “Chic Italian option for Sicilian cooking & wines set in a historic mill with a patio & water views.”

On the losses facing Cosima, Golding noted “income obviously. Also, we had food that wouldn’t have lasted through this period, but I was able to let employees take that home.”

Golding has tapped into the state’s and Small Business Administration’s loans available for restaurants.

“If I receive the grants or loans it will help immensely,” she said. “I could afford to pay my employees, keeping them off the unemployment rolls while we wait for things to resolve. I have a great team and want to keep them together.”

Looking to the future, Golding said, “I am fighting as hard as I can to keep Cosima going. Cosima has an amazing to-go menu with lots of stuff we’ve never offered before.”

Me Latte Café, The Daily Special, and Kosher Grill

Salomon Bemaras’ two restaurants and two stadium stands have shut down completely because carry out and delivery are not accessible options. Me Latte Café is located on the campus of Johns Hopkins Hospital in the Koch Cancer Center Research Building; The Daily Special in downtown Baltimore City; and Kosher Grill has stands at Oriole Park at Camden Yards and one at Ravens Stadium. “All buildings closed on March 16,” said Bemaras, whose family attends Beit Yaakov Congregation in Pikesville.

Me Latte Café, for example, “catered meetings at Hopkins that, not only required kosher meals, but others that just like the food,” Bemaras said. Since the buildings have shut down, and there are no more meetings, he has no meetings to cater. “I have been trying to get loans and grants from the SBA and the state,” Bemaras said. He is waiting for a response.

So far, Bemaras said, “the options are not clear.”

Bemaras did try to do carry out at The Daily Special, which opened in April of 2018. However, he said, “most of our customers work downtown, and the volume of orders was not enough to allow us to stay open,” since most surrounding office buildings have also shut down.

With baseball season postponed until further notice, Bemaras has been unable to open the Kosher Grill stand he operates at Camden Yards where he has two part-time employees. Bemaras hopes that the community will support the restaurants once they reopen so that they can recover.

David Dopkin, the son of Baltimore’s late restaurateur Edward “Eddie” Dopkin, said that COVID-19 “has had a devastating effect on our family businesses that have been servicing the community for 50 years.” These businesses include The Classic Catering People and Miss Shirley’s Café’s three locations in Roland Park, the Inner Harbor, and Annapolis, the latter two of which had to close “in a matter of less than a week,” according to Dopkin.

Dopkin added that he hopes he will be able to “reopen our doors at some point soon when the government deems it safe and remain financially viable for the future. The Classic Catering People had been taking orders online for curbside pick-up for Passover until April 3 as well for other family meals, but upcoming social and corporate events have been postponed indefinitely by our loyal clients.”

The impact of COVID-19 and the protocols in place to keep the contagion at a minimum has had a severe impact.

“Sadly, all hourly team members are currently out of work due to the state’s restriction on large gatherings,” Dopkin said. “Our team is truly our extended family, and so many have worked in the business for decades. We have continued to stay in contact with our team and prepare food for them to pick up as well as give other products of necessity to each, along with providing different opportunities that exist to help at this difficult time. We hope and pray that we will be able to bring our dedicated and talented hospitality and culinary teams back to serving throughout Maryland as soon as the governor deems it safe.”

Miss Shirley’s Café in Roland Park is open daily from 8 a.m. to 3 p.m. Orders can be placed “online, via phone, and walk-up carry-out orders,” Dopkin added.

Opened in 2013 by Maryland natives David and Laura Alima, “The Charmery hand crafts super-premium ice cream that focuses on the fun flavors that make Baltimore so delicious,” according to its site.

Like other businesses in the food service sector, The Charmery, with shops in Hampden and Towson, has also experienced losses. Most of its 30-member staff have been laid off, David Alima said. He and his wife, who met at Camp Moshava, closed the production center, and their plans to open a third store in Federal Hill have been placed on hold indefinitely.

“This is absolutely devastating,” said David Alima, an alum of Beth Tfiloh Dahan Community School. “We generally slow down in the winter and use this time period, which we call the swing months, to recover,” before the busy summer season. The Alimas are now doing delivery and curbside pick-up.

Despite the effects of COVID-19 on business, Alima remains grateful.

“The community support has been amazing,” Alima said. “I am thankful to the community and to the restaurants that have sold the pints for us and the people who are ordering. It’s what makes us get through the day.”

The Alimas are contributing one dollar of each sale towards its laid-off employee super fund.

Elan Kotz opened Orto — Italian for vegetable garden — in February of 2019 in Baltimore City’s Station North neighborhood, a neighborhood known for its art galleries, artists’ studios, and performance spaces. Baltimore Magazine included Orto in its “Best Restaurants” feature in May 2019, giving it a rave review for its food and service.

Kotz and his team are working “diligently and creatively” to stay in business. Just a few weeks after Hogan ordered a state shutdown of all nonessential businesses, Orto is experiencing the economic devastation felt by the restaurant and food industry locally and throughout the nation.

“Business has slowed drastically,” said Kotz, who spent his summers in Israel growing up. “We have lost 70% of revenue, but we are working diligently and creatively to still provide good food to the community. We are making Passover cookies and Easter dinner to really just cover costs. It’s tough. This is the hardest time I’ve seen in the industry, but I know we are going to recover.”

Kotz employed 32 people prior to the spread of COVID-19. He shared that he was forced to lay off all but seven of his employees — four full-time and three part-time employees.

“We are opening for carry-out five nights a week,” Katz continued, “because our goal is to provide nourishing meals to the community at this time. A lot of our people need the work, and if we can start to see carry-out orders pick up, we may increase the number of employees. It is important to stay positive and work together as a team and as a community to stay on the other side of this thing.”

Orto is currently providing carry out on Wednesdays through Sundays from 5 p.m. to 8 p.m., with an extended hour on Fridays and Saturdays, from 5 p.m. until 9 p.m.

Asked what being unable to welcome people on-site meant to him, Kotz replied, “People who work in the hospitality business are givers. We like to cook and provide for people. That has clearly changed, but I am hoping that people are still enjoying the food and that they are still connecting, whether they are calling or video chatting. We all know that this thing is going to pass, and that we will come out of this.”

Just before this story went to print, Kotz learned he had received a donation to give his restaurant a new purpose.

“A Jewish donor who wishes to remain anonymous donated money for us to cook and deliver meals to hospital workers and EMS responders on the front lines,” he said. “It’s an honor that someone chose us to provide the food on their behalf. Charitable actions are rooted in our culture.” 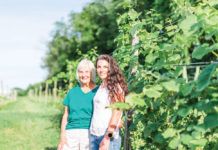