If you are a longtime Baltimorean, maybe you belong to the Facebook group “Baltimore Synagogues: Then and Now” and have read Dr. Kenny Friedman’s posts on landmarks and figures from the past and present of Jewish Baltimore. If you’re a kosher foodie, maybe you’ve taken Friedman’s advice and tried a wine he’s recommended on his Instagram account, @kosherwinetastings. Maybe you’ve sat next to Friedman and his wife, Marla, at a fundraiser for one of the many Jewish institutions to which the couple dedicates their time.

One thing is for sure: If you grew up in or are involved in Jewish Baltimore, there is a good chance that you have encountered, in some capacity, the deeply community- and family-oriented man that is Kenny Friedman.

Friedman, 49, grew up in Randallstown, but his family history “really spans the migration of the Jewish community throughout the last 125 years or so,” he said.

His mother’s father was born in Russia in 1882 and came to America in 1905. He served as president of Anshei Neisin on N. Exeter Street in East Baltimore, the city’s first Lubavitch synagogue. His mother’s mother, meanwhile, was a native Baltimorean, born in the city in the late 1890s.

Eventually, the family moved to Park Circle, where Friedman’s mother, Etta, grew up. His father, Norman, who passed away in Feb. 2020, grew up in Baltimore’s Pimlico neighborhood.

Etta and Norman wed in 1967. In 1972, they bought a house in Randallstown, which was then a brand-new neighborhood, “continuing the Jewish migration north and west,” noted Friedman. They moved to Pikesville in 1998, and Friedman and his wife have lived in Pikesville since 2001. Their eldest child, Gittel, 18, set off this month to study at Tiferet Center in Israel. Ayelet, 17, and Ziva, 11, attend Bais Yaakov of Baltimore; and Yossi, 15, studies at Talmudical Academy.

Recently retired from his position as president of Congregation Shomrei Emunah, Friedman is still involved in a variety of local organizations and institutions: Bikur Cholim, the Jewish Cemetery Association, the Jewish Caring Network, Tour de Court, Talmudical Academy and Camp Shoresh, to name a few.

He cited both of his parents, whose commitment extended beyond the formal institutional sphere, as major inspirations behind his community involvement. His wife, who recently became president of the Levindale Auxiliary and is involved in multiple additional organizations, is an inspiration to him as well. “We feel that we teach our children by example. We believe in giving back to our community,” he said.

“I grew up in a family that felt that giving your time to people is the simplest and most powerful form of charity you can often do,” he continued. “Instead of talking and criticizing, get involved. You should not have a right to criticize something until you get your hands dirty in it.”

He was reluctant to share the full extent of his volunteer activities, concerned that it would sound self-congratulatory; but he does hope that he can inspire other people to get involved in their community. “It is such a rewarding experience,” he said.

‘My main hobby is my family’

Friedman is a chiropractor by profession, but his passion for writing about kosher food and wine has evolved beyond a hobby, and he loves it. “I have spent a lot of time studying and writing about [wine],” he said, “and I hope to lead some tours in the next few years in different regions around the world that are producing world-class wine.”

Friedman is also active on social media – not because he is a fan of posting his personal musings and photos, he said, but because it is a great medium for sharing interests. The main Facebook group that Friedman is known for is “Baltimore Synagogues: Then and Now,” which has 1,312 followers. He started it to give people a forum to talk about Baltimore and share their pictures and memories.

“I grew up hearing my parents talk about old Baltimore and knowing a lot of people that grew up in old Baltimore. People really love being able to relive many of the memories and neighborhoods of their youth,” he said. Friedman hopes to use the content from the group to eventually write a book on the history of Baltimore shuls.

“Wait until I scare my kids by starting a TikTok account,” he deadpanned.

Still, he said earnestly, “my main hobby is my family. Spending time with my wife and kids is the most important hobby I have.” 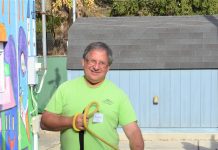