Herta Griffel was 7 in 1940 when she escaped Vienna, alone, for Baltimore. She expected her mother to join her later, but that never happened. Instead, she found herself in a foreign country with no connection to her past.

On July 20, the United States Holocaust Memorial Museum shared Griffel’s story in a Zoom presentation with the Baltimore Jewish Council. The presentation covered how the museum has used Holocaust artifacts to reunite survivors.

Decades after Griffel arrived to Baltimore, the museum received a collection of pictures of a class of Vienna students. After looking into the students, the USHMM found that the only survivor among them was Griffel. They sent out an email with a photo of the original class, stating that Griffel was the only survivor. But when a woman in Connecticut opened the email, she had some news for them: There were two survivors. Griffel and her surviving classmate, Ruth Weiner, reunited in 2018.

“We do a lot of piecing dots of history together,” said Andres Abril, director of the museum’s Mid-Atlantic regional office, who moderated the discussion.

The USHMM Holocaust Survivors and Victims Resource Center works to research individuals. It receives requests from teachers, students, survivors, filmmakers and authors who want to find a grave, information or family.

“This research is very complex historical documents,” said Diane Afuomado, chief of the ITS Research Branch at the center. The center has received 23,377 requests as of 2020. In 2007, the documents amounted to 200 million pages in more than 25 languages.

But it’s worth it. “When we find something, the most rewarding moment is the ‘Oh my god’ moment. A lot of people don’t expect to find any information,” Afuomado said.

At the presentation, the center played a video of another survivor’s story. It was about a family in Israel who had reached out to USHMM to investigate how their father’s siblings died. Instead, they learned they had a surviving aunt. What’s more, she was in Israel, too.

“I feel that I am not alone [now],” said Yehoshua, the survivor, in the video.

It’s not uncommon for families of other countries to go to the USHMM for information. 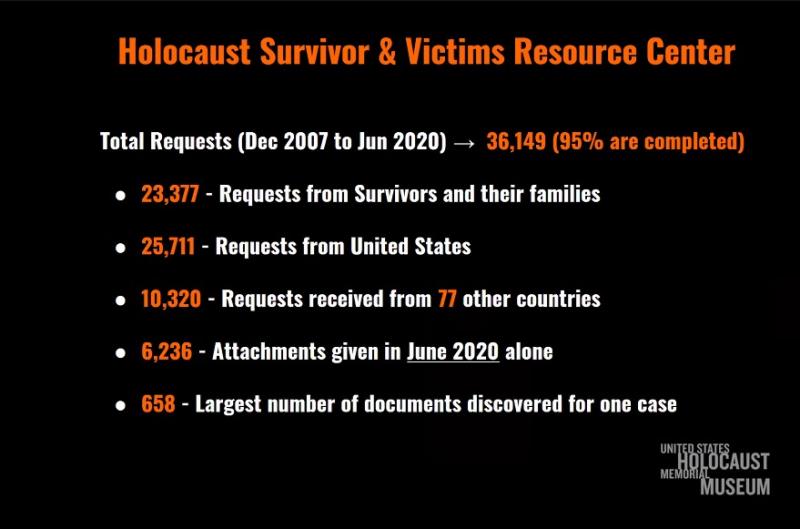 Their free service helps personalize history and humanize the tragedies.

“Through this, we put together classmates, friends and sometimes family,” said Judy Cohen, the museum’s chief acquisitions curator.

If you would like to schedule an investigation, you will need the name of the person, their year of birth and country of birth.