Growing up in Minsk, Belarus in the 1990s, Olga Cherches knew better than to call attention to the fact that she was Jewish. The post-World War II Jewish community in Minsk was already small but it became even tinier as most Jewish families began to emigrate to the U.S., Israel and elsewhere. In the early years of elementary school, Cherches was one of only three Jewish children at her school. Eventually, those children left too.

“The anti-Semitism was horrific,” she recalles. “I had one friend only. And I used to wonder, ‘Why do they tease me? Is being a Jew bad?’ When you’re raised in a community like that, you have to hide your religion.”

Yet, Cherches’ childhood was not without bright spots, and it wasn’t entirely secular either. Despite their fears of repercussions, Cherches’ parents wanted her to know about her Jewish heritage. Along with a few other families, they sent her to a small synagogue-based Hebrew school when she was 11.

“It was brave of my parents to bring me to school. Just to read from the books in the library [at the school] was such joy. There were very dedicated people working with us, and the kids still keep in touch on Facebook,” says Cherches who is now 36 and living in Owings Mills.

Several years later, when she was about 14, Cherches was sent to a three-week Jewish summer camp program outside of Moscow. The camp opened up a whole Jewish world to her. “During that time, there were pioneer camps. They were just places where you could send your kids, but they didn’t have any programs,” she says. “But the Jewish pioneer camps had an educational component. We learned about Israeli culture and Hebrew. Probably half of the kids there weren’t Jewish,” she says. “But we could speak openly about Jewish things. It was amazing, so much fun!”

Cherches came to the U.S. nine years ago to marry her childhood friend, Dmitri, who had left Minsk some years earlier. They now have three children. Cherches, who is active with The Associated: Jewish Community Federation of Baltimore and its Shalom Baltimore program, is raising them with plenty of Jewish education but still feels it’s important that they know about their parents’ histories and their Russian roots.

Benson Liberman’s parents feel similarly. Several years ago, the Libermans, also Russian émigrés, sent Benson to Havurah, a specially designed camp program for Russian Jewish children in Barryville, N.Y. Liberman says his parents learned of the program through a cousin and thought it would be good for him to spend time with “people like me. They said I would like it there, and they were right.”

A project that grew out of a partnership between the Tel Yehudah Genesis Philanthropy Group, the Foundation for Jewish Camp and the Jewish Agency for Israel, the nearly five-year-old program is located on the grounds of Camp Tel Yehudah and affiliated with the Young Judea movement. In addition to participating in typical camp activities, campers in the Havurah program also learn about Judaism.

Julia Smirnova was a counselor at Havurah before becoming director of the program last summer. She says the goal of the program is to keep young Russian Jews involved in the Jewish community.

“Most of the parents of the kids in Havurah didn’t identify as religiously Jewish and didn’t practice Judaism in Russia. They were outcasts
[because of being Jewish] there,” says Smirnova. “They want their children to be more knowledgeable about Judaism than they are.”

That’s the case for Vladamir Kluzner and Julia Wolfson of Rogers Forge. Their son, Daniel, a 14-year-old who attends Carver Center for the Arts and Technology in Towson, will attend Havurah for the first time this summer. Growing up in Russia, Wolfson says her experience with Judaism was limited to holiday meals at her grandmother’s home. Prior to coming to the U.S., the family lived in Israel, where Wolfson says they became more knowledgeable about Jewish traditions. She says she is happy about her son going to a camp for Russian Jews. “It’s a good thing,” she says. “It’s nice to feel the same as everyone else. It’s like being home.” Daniel says he only has one Jewish friend, who isn’t Russian, and he is looking forward to being around other Russian Jews.

At the beginning of the first week of camp, Smirnova says that most campers don’t understand Hebrew. Fortunately, counselors who speak English, Russian and Hebrew are able to translate. “We do a lot of activities about Israel and talk about issues that are specific to Russian Jews.” By the end of the season, most campers say they feel more connected to Judaism and to Israel.

Benson, who is now 18, plans to return to camp as a counselor this summer. “People tell me it’s the hardest job I’ll ever love,” he says with a big smile. “I wouldn’t be the person I am today if it were not for camp. I came home a better person. It helped me overcome shyness and brought me closer to nature.” Liberman says he also learned a great deal about Israel. In fact, he was so inspired by what he learned, he and a camp friend recently went on a Birthright Israel trip together.

“It’s unique for kids who are born in the U.S. but grew up in Russian households to have the opportunity to connect with other Russian Jewish kids,” says Smirnova. There’s a difference between being a Russian Jew compared to just being Russian.”

The distinction is not lost on 23-year-old Naomi Simanin of Silver Spring. She was born in the former Soviet Union but moved to Israel at 9 months of age. When she was 7, her family settled in Maryland. “I always had a very strong Jewish identity but not much of a Russian one. When I was in 10th grade, I remember saying something about being Russian. My father said, ‘You’re not Russian, you’re Jewish.’” Simanin says she understands why her father reacted that way. “He shut me down because living in Russia wasn’t great for him. He faced beatings at school that haunted him for the rest of
his life.”

Simanin’s mother was attracted to Havurah because it was for children who were both Russian and Jewish. After her brother had a great experience there, Simanin became a counselor at the camp.

Living among people who shared her cultural background, Simanin was struck by how much they had in common.

“Things we ate, little weird traditions, superstitions, the way Russian parents don’t baby their kids. The more you explore, the more you see that being a Russian Jew is different from being just Russian or just Jewish. It’s a completely different entity,” she says.

“I am very, very grateful to Havurah. It really gives Jewish Russian American kids a place to express these parts of themselves. It helped me figure out what I wanted to do in life,” says Simanin, who is studying audiology and speech at University of Maryland. “I found my fiance there too. I owe a lot to the program.” 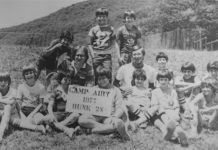