On New Year’s Day 2015, Alexander Schostak took Abigail Malis to the American Visionary Arts Museum, but this was no typical visit.

Alex knew it was Abby’s favorite place in her native Baltimore, and he was going to have her mom, Shelly Malis, suggest they go there during a family brunch with her aunt, uncle and cousins.

As they discussed spending the day in the city, Abby’s aunt followed the plan and suggested the museum, and Alex nervously glanced at Shelly.

They enjoyed the museum’s exhibits and stopped in the gift shop before leaving. Browsing around, Alex came to a drawer that held small toys for 25 cents. As a joke, he picked up a gold band and showed it to Abby. It wasn’t that funny, she said, as a friend had just texted her, asking if she was getting engaged that weekend.

Later, seated in a different area, Alex pulled out the 25-cent ring, dropped to his knee and said, “I guess I have to give you a better ring then.”

He then pulled out a ring that combined stones from her mother and his grandmother.

Abby was in shock, and it took about 90 seconds — and Alex joking that he would take the ring back — for her to accept it.

The proposal was the culmination of a year of dating after meeting online. They shared coffee after grad school classes one day in New York City at Café Olé. The conversation flowed naturally, and they realized they had been in class together the previous semester at the Jewish Theological Seminary. Both attended classes there as part of their grad school studies, he in Jewish education and she in social work.

After a few dates, they felt the romance and shared their first kiss. They enjoyed movies and dining out. Abby knew her feelings were serious when she worried for Alex as he studied for the comprehensive exam for his second master’s degree. Her mother visited and met Alex, and then the couple traveled to Detroit for Passover; Abby met Alex’s parents, Lillian and Lee Schostak, as well as Alex’s friends.

In May, after both graduated, they looked for jobs in the same city. White Plains, N.Y., became their new home, and they knew they would be
together long-term.

They married Jan. 2, 2016 at Woodholme Country Club. Rabbi Deborah Wechsler from Chizuk Amuno Congregation and Rabbi Aaron Bergman from Adat Shalom Synagogue in Detroit performed the ceremony that featured a Havdalah service for the bridal party, a tish and a bedeken. A chuppah made from wishes and blessings from their friends and family by Art with a Heart served as the ritual canopy.

“Very early in the relationship, even on the first few dates, I noticed how we were finishing each other’s sentences or saying the same thing to each other,” said Alex, 28, now a Jewish educator in Baltimore. “We were very in sync from the first date.”

“It always felt like the right thing,” added Abby, 27, now a senior associate for community partnerships at Jewish Volunteer Connection. “I always felt he loved me just for who I was … I could just be me.” 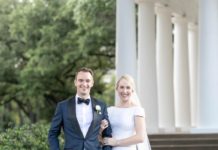 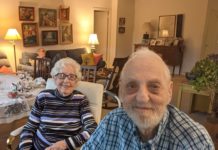