President Frank-Walter Steinmeier of Germany said the state “must protect Jewish life” in the aftermath of a shooting attack near a synagogue in Halle, Germany, on Yom Kippur.

On Wednesday Oct. 9, the gunman opened fire near the synagogue in eastern Germany during Yom Kippur services as well as at a kebab shop in an attack that he livestreamed from a helmet camera. The assailant, who killed two people, said that Jews are “the root of all problems.” Based on the footage, it appears he only failed to attack anyone in the synagogue because the metal doors were locked.

German media identified the alleged perpetrator as Stephan Balliet, a 27-year-old German and resident of Saxony-Anhalt, the German state that includes Halle.

Germany’s chief federal prosecutor, Peter Frank, told reporters that Balliet had nearly nine pounds of explosives in his car at the time of his capture, The Associated Press reported.

A spokesman for Frank’s office subsequently shared on Oct. 11 that Balliet gave a “very comprehensive” confession, including confirmation of his “far-right and anti-Semitic motives.” Ballliet will stand still trial, and his case is being treated as a terrorist attack.

On Oct. 10, President Steinmeier visited the site of the attack and met with Jewish leaders at the synagogue.

“It must be clear that the state takes responsibility for Jewish life, for the security of Jewish life in Germany,” he told them, according to media reports.

“The representatives of the constitutional state must use all means available against hate, violence and misanthropy. There is zero tolerance,” she said Oct. 10.

The previous night, Merkel joined a solidarity vigil at a historic synagogue in central Berlin, where she also condemned the attack and asserted that Germany would protect the Jewish community, AFP reported.
“My aim, and that of all politicians, is to do everything to ensure you can live safely,” the chancellor said. “And this day shows that it hasn’t been enough, that we have to do more.”

Josef Schuster, head of the Central Council of Jews in Germany, doubled down on his accusation that police did not adequately protect the Halle synagogue.

“If police had been stationed outside the synagogue, then this man could have been disarmed before he could attack the others,” Schuster told Deutschlandfunk public radio, according to Reuters.

The head of Germany’s police union responded that the police could not provide such protection, according to Reuters.

“We’d have to guard every synagogue, every church, every mosque, every holy place in Germany around the clock, so I don’t know if this was a mistake or if this really couldn’t have been foreseen,” Oliver Malchow said in a TV interview.

A manifesto believed to be written by Balliet was posted online before the shooting and distributed by sympathizers on the messaging app Telegram. Allegedly written on Oct. 1, it said his objective was to “kill as many anti-whites as possible, Jews preferred.”

The attack was the first lethal anti-Semitic assault in decades in Germany by a far-right extremist. Most of the attacks against Jews in Germany over the past 30 years have been carried out by Muslims.

Days before the attack in Halle, security guards used pepper spray to subdue a knife-brandishing man, a 23-year-old refugee from Syria, after he crossed the security barrier outside a Berlin synagogue. He was muttering “God is great” in Arabic, according to German media outlets, and refused to drop the knife at gunpoint. Reports indicate it was unclear to law enforcement whether the man was experiencing some kind of psychological episode. He was arrested but ultimately released by police after a search of his apartment initially failed to turn up any evidence for a motive. 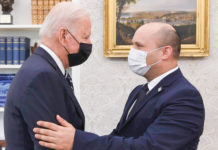 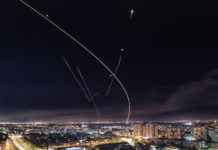