Parshat Miketz tells the story of Joseph’s rise to power in Egypt and the tests he imposes on his brothers. We always read the Joseph stories during Chanukah, and this is no coincidence.

At the beginning of Miketz, Joseph is summoned to interpret Pharaoh’s dreams. Before hearing Pharaoh’s dreams, Joseph emphasizes that any success is not his: “And Joseph answered Pharaoh saying, It is not in me: God shall give Pharaoh an answer of peace” (Gen. 41:16). While explaining Pharaoh’s dreams, Joseph emphasizes God’s name and God’s role in what will unfold. Indeed, from the moment he arrived in Egypt Joseph has been readily identified with God. As a servant in Potiphar’s home, the Torah tells us “the Lord was with Joseph and he was a successful man…And his master saw that the Lord was with him and that the Lord lent success to everything he undertook” (39:2-3). Rashi explains that Potiphar recognized God’s role because Joseph constantly talked about God.

Returning to Joseph’s encounter with Pharaoh, Nechama Leibowitz notes that by the end Joseph has succeed in instilling a recognition of God in Pharaoh. As Pharaoh accepts Joseph’s interpretation of the dreams, he declares to his servants, “Can we find such one as this, a man in whom is the spirit of God?” (41:38).

Joseph’s success in this regard can be explained by a fascinating Midrash. After interpreting the butler’s dream, Joseph asks the butler to put in a good word to Pharaoh so that Joseph may be freed from prison. Joseph elaborates: “For in truth, I was kidnapped from the land of the Hebrews; nor have I done anything here that they should have put me in the dungeon” (40:15). The Midrash explains that because he identified as a Hebrew, Joseph merited to be buried in the land of Israel. This is in contrast to Moses, who was identified as an Egyptian man by Jethro’s daughters. We see that Joseph was not ashamed to declare his identity and his true beliefs even in a hostile environment.

This is the essence of Chanukah. Ideally, the Menorah should be placed outside, in the public sphere, in order to publicize the miracle. Maimonides rules that even a poor person supported by charity must light Chanukah candles. I have always understood the explanation is that the message of Chanukah is for every Jew to feel proud of their Jewishness and to feel comfortable expressing their Jewish identity. A poor person, reduced to begging on the streets, may feel particularly ashamed, or that they have no self-worth.

Jewish law insists that all Jews must light Chanukah candles and declare their Jewish pride to the world.

This Joseph-Chanukah message is more relevant than ever. As we confront the rising trends of anti-Semitism, it is easy to feel scared to declare our Jewishness to the world. May we draw confidence and inspiration from Joseph and the story of Chanukah. 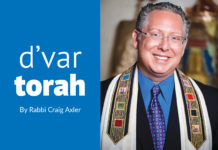