LOWELL. Mass. – Lowell Mayor John Leahy has demanded the resignation of School Committee member Robert Hoey Jr. after Hoey appeared on a live Cable TV program on Feb. 24 and used the K word to refer to a former administrator at the Lowell Public Schools.

Hoey, who hosts the morning show “City Life” on Lowell Telecommunications Corporation cable access Channel 8, made the statement on the live program at around 6:35 a.m. while discussing school personnel. “We lost the k—–, I mean the Jewish guy. I hate to say it but that’s what people used to say behind his back – Gary Frisch … He was the guy in charge of our budget,” said Hoey.

Hoey was first elected to the Lowell School Committee in 2015. Hoey could not be reached for comment.

Frisch, who formerly worked for the Lowell Public Schools, is now the director of Finance and Operations for the Gloucester Public Schools. Frisch could not be reached for comment.

Hours after Hoey’s comments were broadcast, Leahy requested that the Lowell City Council and the School Committee hold a joint meeting to demand the immediate resignation of Hoey “for offensive conduct that shocks the conscience.”

“Earlier today, a member of the Lowell School Committee, Robert Hoey, used an offensive and repulsive racial slur on a televised morning show. As a result, I am calling Lowell’s elected officials to join me in demanding the immediate resignation of Robert Hoey as a member of the Lowell School Committee,” Leahy said in a statement. “Throughout this academic year, this School Committee has focused on issues of equity and racial equality in our schools and in our community. To fully represent the interest and diversity of our students and our community, we must not only join together in rejecting this language, but continue working towards that more perfect union.”

Leahy has yet to propose a date for the joint meeting.

Jackie Doherty, another member of the School Committee, was also a guest on the “City Life” TV program on Wednesday but appeared after Hoey’s use of the anti-Semitic slur.

“I did not hear Mr. Hoey’s remark nor was it referenced at any point during the hour I was on the program,” Doherty said in a statement Wednesday night. “After learning about it tonight, I am appalled and wholeheartedly condemn such language. It is offensive and harmful to the community I love where our diversity is a source of strength and pride.”

Robert Trestan, executive director of the Anti-Defamation League’s Boston office, said that Hoey should apologize and engage in some self-reflection about the harm and the damage of the words that he used.

“It’s just outrageous and shocking that an elected official in 2021 would refer to someone Jewish using a slur that is only common among neo-Nazis and white supremacists,” said Trestan.

“The other concerning part of this is when he uses the word k—, he uses it in the context as an attack on a former employee who apparently had some responsibility over funds. And so the combination of using the word kike and connecting it to this man’s job – and it being related to money – only enforces an anti-Semitic stereotype about Jews and money. So it’s not just the use of the slur ­– which is horrible – he’s using it in a way that reinforces and sends a message to others that’s anti-Semitic.”

After Hoey made the comment, the program continued for another 85 minutes without any guests condemning the slur.

“Another troubling thing is nobody called him out on it,” said Trestan. “It happened on a live program but if you hear someone say this and you remain silent and don’t call it out, you know, in some ways you’re just as culpable. One of the primary things we teach kids in school is that you should be calling out racism, anti-Semitism, and hate in real time. Imagine if a teacher used that word in a school. What would the school do to the teacher?”

Steven A. Rosenberg is the editor and publisher of the Jewish Journal. 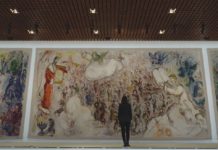